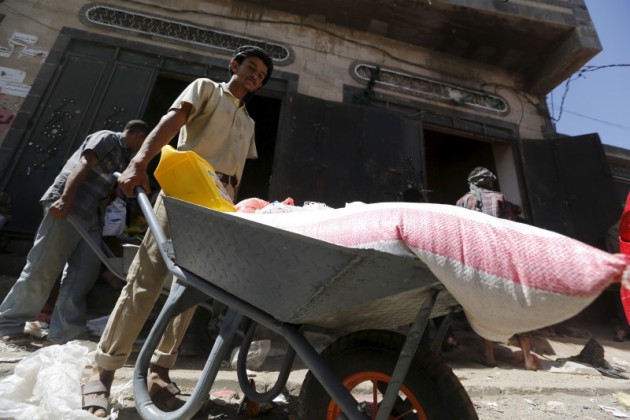 SANAA (Reuters) – Nearly half of Yemen’s 22 provinces on the verge of famine as result of the war there and more than 13 million people need food aid, the U.N. World Food Programme (WFP) says.

Aid groups have blamed curbs imposed by the Saudi-led coalition on access to Houthi-controlled ports for the crisis and also accuse Houthis of preventing supplies from reaching some areas, including the city of Taiz in the southwest.

“From a food security perspective, 10 of Yemen’s 22 provinces are classified as emergency, which is one step before famine,” Adham Musallam, deputy director of the WFP office in the capital Sanaa, said as the agency launched a food voucher program to help the most needy.

Fighting over the past year has displaced about 2.3 million people and left more than half of Yemen’s 26 million population in need of food aid, Musallam said.

“This means that we must not wait until the situation reaches famine but must act now to provide humanitarian aid directly,” Musallam said.

The Houthis took over Sanaa in September 2014, ousting President Abd-Rabbu Mansour Hadi, then seized his temporary headquarters in the southern port city of Aden.

The Saudi-led Arab coalition intervened in March 2015 to try to restore Hadi to power and roll back Houthi gains. More than 6,200 people have been killed in the conflict, half of them civilians.

To counter the food crisis, the WFP has launched a program of emergency food vouchers to provide up to one million people with basic needs eventually.

In Sanaa, which is still under Houthi control, hundreds of people queued for hours to register for the vouchers. Under the program a family of six receives wheat grain, pulses, vegetable oil, salt and sugar provided by the WFP through a local supplier.

But one Sanaa resident expressed concern that the aid might not be sustained.

“We would like to have rations provided for the entire month, not just for a week or five days,” he told Reuters TV.

Many Yemenis have sought refuge in Sanaa after air strikes by the Saudi-led coalition destroyed their homes, especially in northern Yemen, where the Houthis, a Zaydi Shi’ite group, come from.

The United Nations, which had hosted two inconclusive rounds of peace talks in Switzerland last year, is pressing ahead on the diplomatic front for another round of negotiations. A senior Yemeni official said on Tuesday it might take place in Kuwait next month.

“The Yemeni people appreciate the need for humanitarian assistance but what they really need is an end to the war which is more important,” said Radman Hassan, a food voucher recipient.