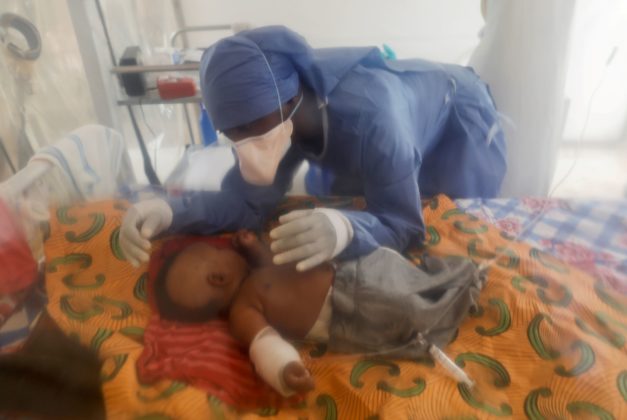 GOMA, Democratic Republic of Congo (Reuters) – International organizations warned on Friday of a potential resurgence of Ebola in Congo after deadly militia attacks on health centers forced aid groups to suspend operations and withdraw staff from the epidemic’s last strongholds.

Mai Mai militia fighters killed four people and injured several others at two Ebola centers on Thursday in the worst yet of violence hampering efforts to tame the outbreak in eastern Democratic Republic of Congo (DRC).

The world’s second biggest Ebola epidemic on record has killed over 2,200 people since mid-2018, but new infections slowed in recent months.

“Ebola was retreating and now it is likely to resurge,” World Health Organization (WHO) spokesman Christian Lindmeier told a news briefing in Geneva. WHO has relocated 173 staff while the U.N. children’s agency UNICEF has evacuated 20 staff.

After Thursday’s fatal raids on health centers in Mangina and Byakoto, a screening center was also attacked overnight in the town of Oicha, Congolese health authorities said.

Mai Mai fighters and local residents have attacked health facilities sometimes because they believe Ebola does not exist and in other cases because of resentment that they have not benefited from the influx of donor funding.

The International Federation of the Red Cross (IFRC) halted operations in the towns of Mangina, Beni and Butembo.

“We’ve had to put all Ebola activities on hold in high-risk areas,” said Corrie Butler, spokeswoman for the IFRC in Congo, saying the attacks had been in areas with most Ebola cases.

At least 1,500 Red Cross staff and volunteers are involved in Ebola work in east Congo, she said, most in areas where activities are now suspended due to violence.

The World Food Programme (WFP), another U.N. agency which provides food to those around infected people and at risk of Ebola, said its activities had also been interrupted due to insecurity.

Congolese health authorities said they had evacuated 13 staff and other transfers were underway.

The Alliance for International Medical Action (ALIMA) charity said activities at its treatment centers in Mambasa and Katwa towns were not suspended but it was monitoring the security situation closely.

Thursday’s attacks followed raids on communities by suspected Islamist rebels believed to have killed at least 100 people in the past month, according to U.N. figures.

At least four people also died this week during protests at the perceived failure of the army and U.N. peacekeepers to protect civilians from the Islamist Allied Democratic Forces (ADF)