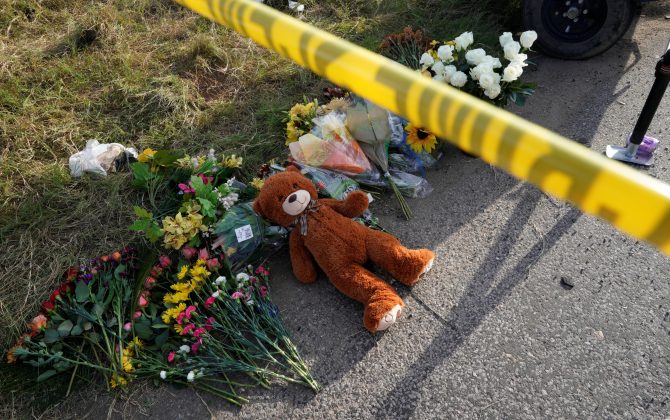 A Teddy bear lies under police tape at a makeshift memorial for those killed in the shooting at the First Baptist Church of Sutherland, Texas, U.S., November 6, 2017. REUTERS/Rick Wilking

SUTHERLAND SPRINGS, Texas (Reuters) – After one of the nation’s deadliest mass shootings unfolded on their doorstep, pastors and parishioners around the tiny Texas hamlet of Sutherland Springs have begun asking whether guns have a rightful place inside their houses of worship.

It is a debate that is echoing across the United States as security experts and some politicians ask churches to consider a wide range of enhanced measures to thwart tragedies like Sunday’s deadly rampage at the First Baptist Church.

Barbara Burdette, who knew the 26 people killed in the massacre and as well as the 20 wounded, is ready to see her church hire armed security, or allow congregants to carry their own concealed firearms for self-defense.

“God is our protector,” said Burdette, 62, “but I do still think that we need to have people with conceal carry.”

Her pastor at the First Baptist Church of La Vernia, a one-story brick sanctuary 7 miles from the shooting scene, said the issue of guns in church requires a delicate balance between providing safety instead of fear.

Arming parishioners is not the only option. At the historic black church in Charleston, South Carolina, where a white gunman killed nine at a June 2015 bible study session, uniformed police officers now attend regular worship services.

“It’s part of our new normal,” said Reverend Eric Manning at Emanuel African Methodist Episcopal Church, by phone. He said the church also created in-house security, as have most black churches in the region.

Muslim and Jewish institutions for years have added security measures to address the threat of violence and hate crimes. The Council on American-Islamic Relations (CAIR) stresses the importance of security cameras, strong doors and clearing brush away from buildings so attackers have no place to hide.

A law enforcement vehicle prominently parked in front of a house of worship is also a strong deterrent to crime, said Claude Pichard, director of Training Force USA, which worked with churches across the country to improve security after the Charleston shooting.

The question of enabling, or even encouraging, parishioners to shoot back is a discussion particularly important to communities where guns are a part of life, such as rural Texas.

In Sutherland Springs, the shooter was confronted as he left the church by a resident who shot and wounded him.

Texas Attorney General Ken Paxton told Fox News that churches should consider whether they wanted parishioners to be armed as a way of preventing another tragedy.

His state allows for the concealed carrying of handguns by licensed owners. It is not clear exactly how First Baptist Church, where the shooting occurred, addressed gun issues.

A sheriff in Williamson County, Texas, a two-hour drive from the massacre, expects to discuss arming parishioners at a church security summit he is organizing in the wake of the attack. He said churches have a responsibility to ensure that responding officers can distinguish a protector from the assailant.

“What are you doing to make sure we don’t have a friendly on friendly fire?” said Sheriff Robert Chody by phone.

New Life Church, a congregation of 10,000 people in Colorado Springs, Colorado, requires churchgoers to leave their guns in their vehicles, a decade after it was the scene of a deadly shooting that killed two. A parishioner trained in church security used a firearm to wound the shooter, preventing greater carnage, said pastor Brady Boyd.

“Pastors are now waking up to this reality that we are not living in Mayberry anymore,” he said, referring to the fictitious North Carolina hometown on the “Andy Griffith Show,” a long-running 1960s television comedy.

He pointed out that no church could have security in place to withstand an attack by a military-trained shooter using an assault rifle, the scenario that unfolded this weekend in Texas.

About 10 miles from the shooting, Floresville Christian Fellowship Pastor Bennie Herrera said he needed to re-examine security but knows there is only so much that can be done.

“We will not be gripped by fear,” he said. “Faith will rise up and we will come together,” he said.