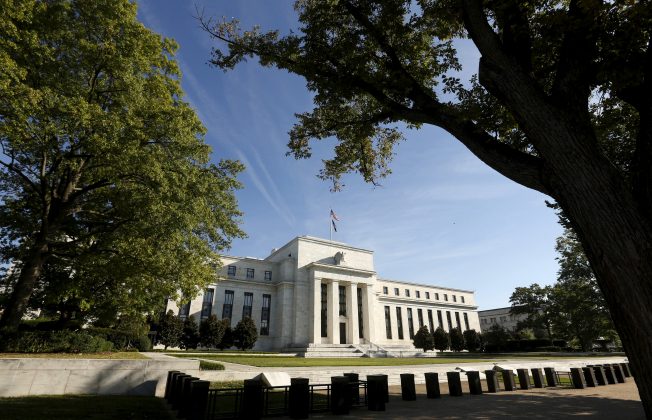 BENGALURU (Reuters) – The U.S. Federal Reserve is almost certain to raise interest rates later this month, according to a Reuters poll of economists, a majority of whom now expect three more rate rises next year compared with two when surveyed just weeks ago.

The results, from a survey taken just before the U.S. Senate voted to pass tax cuts that are expected to add about $1.4 trillion to the national debt over the next decade, show economists were already becoming more convinced that rates will need to go even higher.

While about 80 percent of economists surveyed in October said such tax cuts were not necessary, the passage of the bill, President Donald Trump’s first major legislative success, means the forecast risks have shifted toward higher rates, and faster.

The poll’s newly raised expectations for three rate rises next year are now in line with the Fed’s own projections. But they come despite a split among U.S. policymakers on the outlook for inflation, which has remained persistently low.

That is a similar challenge faced by other major central banks, who are generally turning away from easy monetary policy put in place since the financial crisis, looking through still-weak wage inflation and overall price pressures for now.

The core personal consumption expenditures price index (PCE), which excludes food and energy and is the Fed’s preferred inflation measure, has undershot the central bank’s 2 percent target for nearly 5-1/2 years.

The latest Reuters poll results suggest it is expected to average below 2 percent until 2019.

While the U.S. economy expanded in the third quarter at a 3.3 percent annualized rate, its fastest pace in three years, the latest Reuters poll – taken mostly before the release of that data – suggested that may be the best growth rate at least until the second half of 2019.

The most optimistic growth forecast at any point over the next year or so was 3.7 percent, well below the post-financial crisis peak of 5.6 percent in the fourth quarter of 2009.

Still, all the 103 economists polled, including 19 large banks that deal directly with the Fed, said the federal funds rate will go up again in December by 25 basis points, to 1.25-1.50 percent.

“This is about just getting back to a neutral level where monetary policy is neither encouraging growth or pushing against growth,” said Brett Ryan, senior U.S. economist at Deutsche Bank, which recently shifted its view to four rate rises next year.

“The Fed is still accommodative at the moment and we are still some ways away from the neutral fed funds rate which would in the Fed’s view be closer to 2.75 percent. The Fed can hike without slowing the economy.”

Financial markets are also pricing in over a 90 percent chance of a 25 basis-point hike in December, largely based on the falling unemployment rate and reasonably strong economic growth this year.

Asked what is the primary driver behind the Fed’s wish to raise rates further, over 40 percent of respondents said it was to tap down future inflation.

However, almost a third of economists said it is to gather enough ammunition to combat the next recession.

“At some point we are going to have a downturn and they (the Fed) are going to need to react and it is harder to do that when rates are closer to zero,” said Sam Bullard, an economist at Wells Fargo.

The remaining roughly 30 percent had varied responses, including some who said higher rates were needed to avoid risks to financial stability.

Over 90 percent of the 66 economists who answered another question said that the coming changes at the Fed – a new Fed Chair along with several new Fed Board members – will also not alter the current expected course of rate hikes.

“Both the rate tightening outlook and balance sheet reduction program will remain in place as the Fed officials fill open seats. Easing of financial regulation is likely the area that has the most forthcoming changes,” Bullard said.