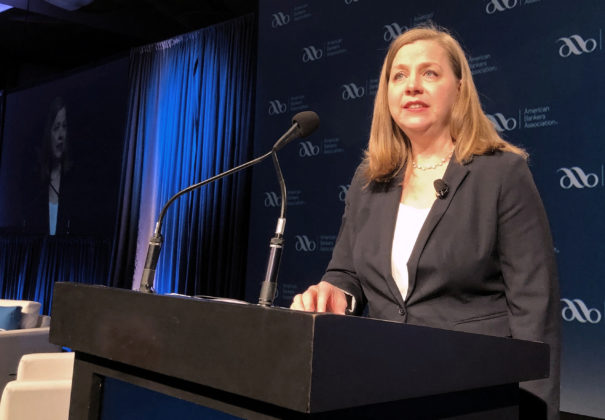 WASHINGTON (Reuters) -A period of high inflation in the United States may last longer than anticipated, two U.S. Federal Reserve officials said on Wednesday, prompting one to pull forward his views on when the central bank should start raising interest rates.

Atlanta Fed president Raphael Bostic said with growth surging to an estimated 7% this year and inflation well above the Fed’s 2% target, he now expects interest rates will need to rise in late 2022.

“Given the upside surprise in recent data points I pulled forward my projection,” Bostic said, placing him among seven Fed policymakers who at the central bank’s meeting last week projected the overnight policy rate may need to lift from the current near zero level sometime next year.

That marked a decisive shift from the end of 2020, when 12 Fed policymakers felt crisis-levels of interest rates would need to remain in place into 2024.

The difference in the meantime: Vaccines that have driven back the spread of the coronavirus, and an economic reopening that has proceeded faster, and driven inflation higher, than Fed officials anticipated.

Both Bostic and Fed Governor Michelle Bowman on Wednesday said that while they largely agree recent price increases will prove temporary, they also feel it may take longer than anticipated for them to fade.

“Temporary is going to be a little longer than we expected initially…Rather than it being two to three months it may be six to nine months,” Bostic said in an interview on National Public Radio’s Morning Edition.

Prices for goods like lumber and used cars have pushed some measures of inflation to multi-year highs, with the consumer price index showing a 5% annualized increase in May, the fastest since 2008. Though some prices have begun to ease already, the higher prices have registered among elected officials, and forced the Fed to begin thinking about how to ensure prices don’t spiral too high or too fast.

Bowman in remarks to a Cleveland Federal Reserve bank conference said she agrees prices are being driven by clogged supply chains and surging demand as the economy reopens, factors that should ease.

But she put no frame around when that might happen, saying that “it could take some time,” and would need to be closely watched as the Fed sets policy.

Fed Chair Jerome Powell and other policymakers have staked their current outlook on a presumption that the surge in prices seen as the economy reopened would ease on its own, allowing the Fed to hit its 2% inflation target on average over time.

Powell told a U.S. congressional committee on Tuesday that recent high inflation readings resulted from a “perfect storm” of circumstances related to the reopening, and would abate.

How quickly that happens, however, may influence the Fed’s upcoming decisions about when to begin reducing its $120 billion in monthly bond purchases, and eventually raise interest rates.

Bostic said that “three or four months” of continued job gains should yield enough progress in the recovery of employment to consider pulling back on the bond purchases, a precursor in his view to raising rates.