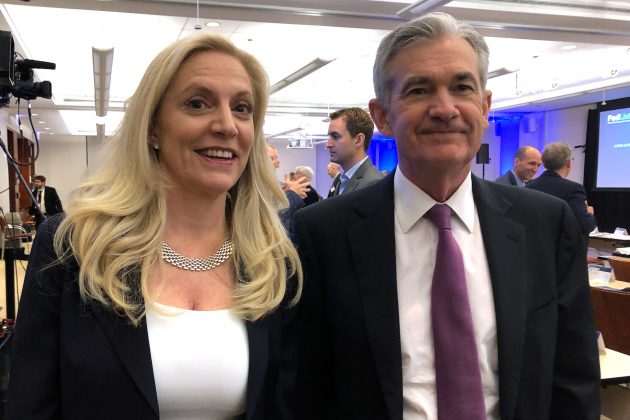 CHICAGO (Reuters) – Signs that the economy is losing momentum hung over a Federal Reserve summit for a second straight day as policymakers hinted they would be ready to cut interest rates if the U.S. trade war threatens a decade-long expansion.

Investors added to bets that the Fed would have to lower borrowing costs multiple times by year-end on Wednesday after a report by a payrolls processor showed private employers added 27,000 jobs in May, well below economists’ expectations and the smallest monthly gain in more than nine years.

The U.S. economy will mark 10 years of expansion in July, the longest on record. Strong job gains have been a key feature. But rising trade tensions between the United States and China have led to tit-for-tat tariffs, put a chill on U.S. businesses’ spending and exacerbated a manufacturing slowdown.

Current and threatened U.S.-China tariffs could slash global economic output by 0.5% in 2020, the International Monetary Fund warned on Wednesday as world finance leaders prepare to meet in Japan this weekend.

“We’ll be prepared to adjust policy to sustain the expansion,” Fed Governor Lael Brainard said in an interview with Yahoo Finance on the sidelines of the Fed’s Chicago summit. “The U.S. economy, generally, is in the midst of a very lengthy expansion, the U.S. consumer remains confident, but trade policy is definitely a downside risk.”

Since the Fed’s last rate-setting meeting, Trump slapped new 25% tariffs on $200 billion of Chinese imports and threatened new import taxes on Mexican goods unless immigration slows. Until recently officials had been largely signaling that they would keep rates at their 2.25-2.50% target range.

The trade war added urgency to what was intended to be a strategy session at the Chicago Fed focused on how the central bank can shore up its policies. Officials worry that economies risk getting stuck in a self-fulfilling cycle of low rates and low inflation that will make it harder to rebound from recessions and require increasingly forceful intervention.

To combat those risks, Fed officials are considering whether they want to temporarily welcome inflation a bit above their 2%-a-year target – and keep rates lower for longer – in the hopes that such a strategy will make attaining the central bank’s goals for maximum employment and price stability more likely.

Policymakers are also revisiting exactly what maximum employment means and whether they are doing a good enough job in how they speak to the public. No changes are expected until next year.