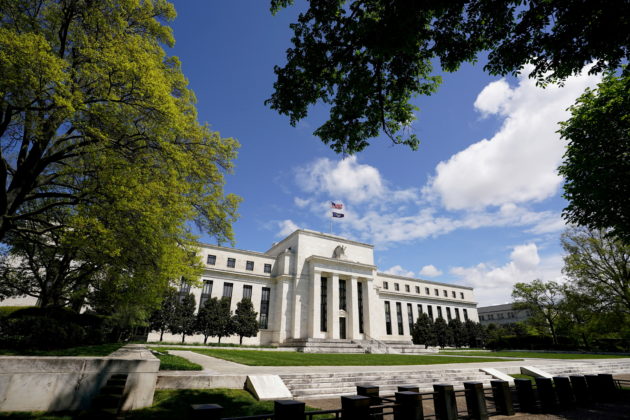 FILE PHOTO: The Federal Reserve building is set against a blue sky in Washington, U.S., May 1, 2020. REUTERS/Kevin Lamarque/File Photo

By Ann Saphir and Lindsay Dunsmuir

(Reuters) -U.S. employers reported significant increases in prices and wages even as economic growth decelerated to a “modest to moderate” pace in September and early October, the Federal Reserve said on Wednesday in its latest compendium of reports about the economy.

“Outlooks for near-term economic activity remained positive, overall, but some Districts noted increased uncertainty and more cautious optimism than in previous months,” according to the summary of information from the Fed’s 12 regional districts, prepared as part of a broad range of briefings ahead of policymakers’ Nov. 2-3 meeting.

Employment increased, though labor growth was dampened by a low supply of workers, despite wage increases designed to attract new hires and keep existing employees, the report said.

Most districts reported “significantly elevated prices,” with some expecting prices to stay high or increase further, and others expecting inflation to moderate. “Many firms raised selling prices indicating a greater ability to pass along cost increases to customers amid strong demand,” the Fed districts reported.

The report will do little to change the immediate course of Fed policy, with central bankers poised to begin reducing their $120 billion in monthly bond purchases as soon as next month after what most see as substantial improvement in the labor market since the end of last year.

But it could help shade discussions of what the Fed ought to do next, particularly as inflation has been running well above the Fed’s 2% target for the last several months.

Policymakers are keenly focused on the drivers of those price rises and whether they will, as most expect, recede next year.

Wednesday’s report showed companies in most districts were feeling price and wage pressures from supply chain bottlenecks as well as from labor constraints.

The Philadelphia Fed reported on one firm that was offering as much as “$90,000 for a second-year CPA position that might have commanded $65,000 before the pandemic.”

The Cleveland Fed said nearly 60% of its contacts reported raising wages recently, but with supply chains slowing production of goods, even that appeared not to be enough. One auto dealer, the district reported, noted that “supply chain disruptions were causing his labor challenges, adding, ‘nothing to sell makes it hard to keep employees.'”

A furniture retailer told the Boston Fed it had raised prices more than 30% since February 2021 to reflect increased shipping and materials costs.

The San Francisco Fed reported competition for talent and workers’ willingness to switch jobs as driving up wages, with one contact from the banking sector calling it “a wage war.”

Meanwhile, the increase in available workers that many employers expected to see as pandemic unemployment benefits expired and schools came back into session failed to materialize in many districts, the report showed.