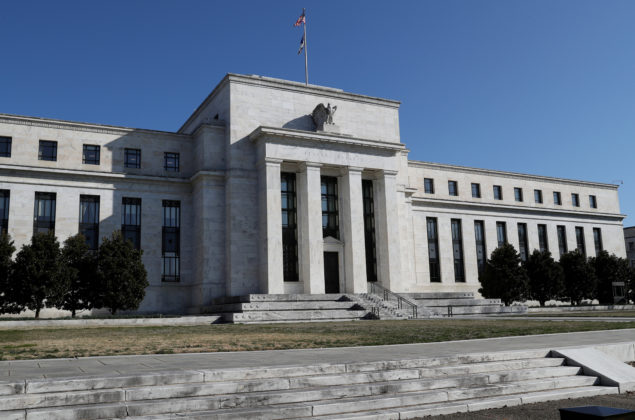 WASHINGTON (Reuters) – The risks of ongoing business failures in the United States “remain considerable” even as the economy emerges from the coronavirus pandemic, the Federal Reserve said on Friday in its semi-annual monetary policy report to Congress.

Business borrowing “now stands near historic highs,” the U.S. central bank said in the report. Even though large cash balances, low interest rates, and renewed economic growth may dampen problems in the near term, “insolvency risks at small and medium-sized firms, as well as at some large firms, remain considerable.”

Fed Chair Jerome Powell will present the report in hearings before the U.S. Senate Banking Committee on Tuesday and the U.S. House of Representatives Financial Services Committee on Wednesday.

After presenting his own summary of where the economy stands he will field questions from lawmakers that are likely to focus on how much more help the economy needs from the federal government to reach the point where ongoing COVID-19 vaccinations make it safe to resume normal commerce.

The Biden administration is pushing a $1.9 trillion stimulus plan that has already cleared a major hurdle in the Senate, money on top of the nearly $900 billion approved late last year and the roughly $3 trillion appropriated at the start of the crisis in 2020.

Those federal payments, including one-time checks to families, increased unemployment insurance, and loans to small businesses, led to faster-than-expected economic growth and less-than-anticipated financial stress among households and the banks that hold their mortgages and credit card loans.

But while banks and household balance sheets remain in reasonable shape, the Fed’s reference to business debt highlights the potential economic hangover still to come after a historically trying year.

Along with business failures, the report noted how changes to the economy that are still underway could, for example, cut the market for already highly-valued commercial real estate and lead to “sharp declines” in prices – a potential blow to investors or lenders involved with those properties.

The report also noted that the borrowing and spending used in some countries to fight the pandemic had made their financial systems “more vulnerable” than before, and the situation may be getting worse. Stress in some emerging market nations, the report warned, could spill over “and produce additional strains for the U.S. financial system and economic activity.”

Next week will be Powell’s first appearance on Capitol Hill since Democrats won the White House and control of both chambers of Congress.

The Fed has pledged to keep its current policy of low interest rates and $120 billion in monthly bond purchases intact until the recovery is more complete. That may be tested in coming months if, as expected, the reopened U.S. economy begins to generate rising inflation.