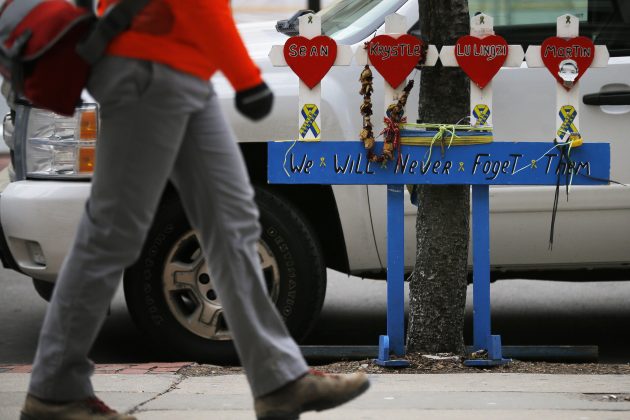 FILE PHOTO: A pedestrian walks past a memorial for the victims of the Boston Marathon bombings and its aftermath near the race's finish line, on the second day of jury selection in the trial of accused Boston Marathon bomber Dzhokhar Tsarnaev in Boston, Massachusetts January 6, 2015. REUTERS/Brian Snyder

BOSTON (Reuters) – Prosecutors on Thursday will urge a federal appeals court to uphold Boston Marathon bomber Dzhokhar Tsarnaev’s conviction and death penalty sentence for helping carry out the 2013 attack, which killed three people and wounded more than 260 others.

The U.S. Justice Department is expected to file a brief urging the 1st U.S. Circuit Court of Appeals in Boston to reject Tsarnaev’s arguments that he was deprived of a fair trial when a judge declined to move the case out of the city rocked by one of the highest-profile attacks on U.S. soil since Sept. 11, 2001.

Their arguments are due by midnight EDT (0400 GMT Friday).

Defense lawyers in a brief filed in December acknowledged that their client, then 19, carried out the April 15, 2013, attack along with his 26-year-old brother, Tamerlan Tsarnaev, who died in a gunbattle with police days later.

But they argued that wall-to-wall media coverage of the bombings meant that nearly the entire jury pool was exposed to news about the attacks, which included “heart-wrenching stories about the homicide victims, the wounded and their families.”

Many victims of the blasts at the packed finished line of the race lost legs.

Defense lawyers said U.S. District Judge George O’Toole also ignored evidence that two jurors had commented on the case on social media before being picked and prevented the defense from telling jurors about Tsarnaev’s brother’s ties to a 2011 triple murder.

That evidence, they said, would have supported their sentencing-related argument that Tsarnaev was a junior partner in a scheme run by his older brother, “an angry and violent man” who had embraced radical Islam.

Dzhokhar Tsarnaev, now 25, is a prisoner in the federal “Supermax” facility in Florence, Colorado.

Prosecutors in a filing earlier this month previewing their opposition brief said they planned to argue that Tsarnaev’s right to a fair trial was not violated.

A federal jury in 2015 found Tsarnaev guilty of placing a pair of homemade pressure-cooker bombs near the finish line of the world-renowned race, as well as fatally shooting a policeman three days later.

A park dedicated to Richard’s memory opened this month on the Boston waterfront.