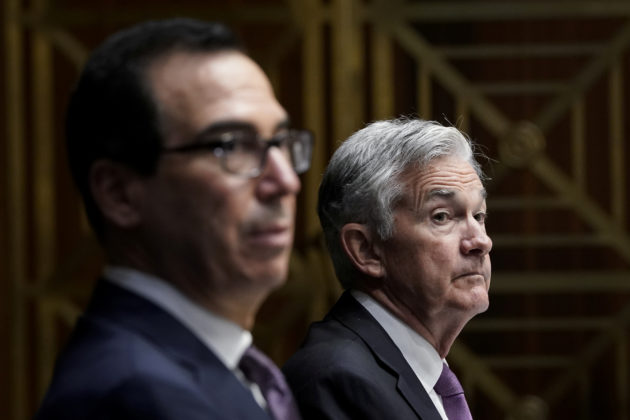 About $200 billion in money allocated to the Treasury to backstop U.S. central bank loans remains uncommitted, Powell and Mnuchin said in a hearing before the Senate Banking Committee.

Mnuchin also pointed to the $130 billion left in the now-expired Paycheck Protection Program to help small businesses, funds he said would his first priority to get approval from Congress to tap and send to needy firms.

In addition, Powell, in response to a question, said most of the $75 billion allocated to the Fed’s largely untapped Main Street Lending Program remains unused.

The focus on reallocating those sums has emerged as Congress has remained deadlocked over providing new fiscal relief that Powell said could make the difference between continued recovery and a much slower economic slog.

While households are spending what’s left of their stimulus checks and unemployment benefits, “the risk is they will go through that money, ultimately, and have to cut back on spending and maybe lose their home or their lease,” Powell said.

“That is the downside risk of no further action. We don’t see much of that yet, but it could well be out there in the not-too-distant future,” Powell said in the last of three hearings in which he testified before Congress this week.

Asked by Republican Senator Mike Crapo, the committee chair, what the best use of the unused funds might be, Powell said it could be spent to help small businesses and households.

Prospects for new fiscal aid are dim less than six weeks before the Nov. 3 presidential election.