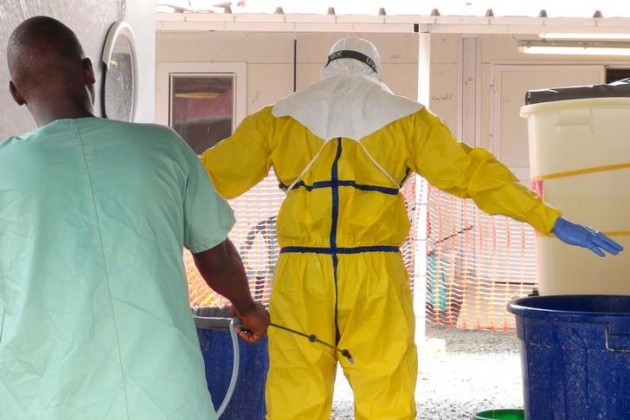 A health worker gets sprayed with disinfectant in an Ebola virus treatment center in Conakry, Guinea, on November 17, 2015. REUTERS / Saliou Samb

CONAKRY (Reuters) – A fifth person has died of Ebola in southeast Guinea since March 17, a health official told Reuters on Tuesday, raising concerns that a recent flare-up of the deadly virus could spread.

The latest case was detected in Macenta prefecture, about 200 kilometers from the village of Korokpara where the four other recent Ebola-related deaths occurred, said Fode Sylla Tass, spokesman for National Coordination of the Fight against Ebola in Guinea.

The man, who has not been identified, had recently visited Korokpara and had been in direct contact with the first patients, Tass said. He was buried in the village of Makoidou without any sanitary precautions.

Burials, where bodies of the deceased are often washed, have been a main cause of transmission of Ebola, which has killed at least 11,300 people in West Africa since 2013 in the worst outbreak on record.

Guinea, one of the worst hit countries, was declared Ebola free in December, but the World Health Organization warned about possible flare-ups.

It was not immediately clear how the people from Korokpara had contracted the disease but the area had previously resisted efforts to fight the illness in the initial epidemic.

Guinea’s Ebola coordination unit has traced an estimated 816 people who may have come into contact with the first four recent victims.

Liberia closed its border with Guinea on Tuesday as a precaution against the latest outbreak.

In Makoidou, news of the latest test was met with panic.

“When the villagers realized that the test conducted by our health teams on the man were positive, they all fled into the bush,” Tass said.