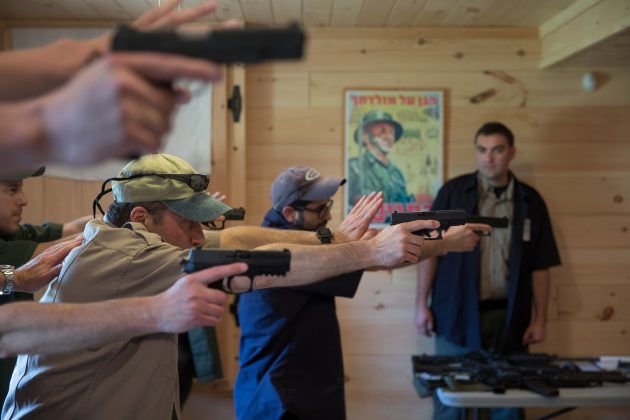 HONESDALE, Pa. (Reuters) – David Ortner adjusted his yarmulke, cocked his pistol and took aim – something he wishes a civilian had done to defend Pittsburgh’s Tree of Life synagogue three days ago when Robert Bowers walked in and shot 11 people dead.

“When this happens, you get a wake-up call,” said Ortner, a 28-year-old owner of an optician shop in Monsey, New York.

Ortner was one of nine Jewish men who attended a one-day course on Tuesday at the privately owned Cherev Gidon Israeli Tactical Defense Academy near Scranton, Pennsylvania, a class that was scheduled on Sunday in response to the Pittsburgh synagogue attack.

He was there to learn how to use a gun to protect himself and his community and prevent a repeat of Saturday’s massacre, the deadliest targeting Jewish people in U.S. history.

“The fact is, we’re at war,” said Yonatan Stern, a veteran officer of the Israel Defense Forces and director of the academy, told his class. “We want every Jew in America armed.”

In the six years since Stern started the academy, demand for firearms training had never been higher than after Saturday’s attack. Hundreds of interested students contacted Stern in the last 72 hours. All but three or four were Jewish.

The spike in demand follows President Donald Trump’s statement that the shooting might have been prevented if the synagogue had employed an armed guard.

But many Jews have resisted the idea that having guns in synagogues is the best way to prevent such attacks.

Rabbi Moti Rieber, executive director of the Kansas Interfaith Action, an advocacy organization, said on Tuesday that he did not believe Trump’s call for more armed guards could prevent attacks on places of worship.

“What kind of country we’re going to be if every house of worship has to have an armed guard?” Rieber said. “I think having less access to that kind of weaponry is going to be much more effective in the long run than having a single armed guard.”

According to Stern, an armed guard at a synagogue is a useful deterrent but not a replacement for armed civilians, since a shooter could kill the armed guard before entering and killing congregants.

“To wait for law enforcement to arrive simply is not the answer,” Stern said.

Some of the students attending the course were card-carrying National Rifle Association members. Some had never fired a gun before. Two worked in schools and wanted to defend Jewish children. Many of them intended to bring guns to their synagogues on the next Sabbath for protection.

“Everybody has to find a way to react; this is my way,” said Zev Guttman, who said he was scared of guns until Saturday’s shooting convinced him he had to be armed.

Stern said that it “touches my heart” to see his students in training because he knows they will return to their synagogues as a first line of defense.

(The story corrects the name of Israel’s military in 5th paragraph to “Israel Defense Forces” instead of “Israeli Defense Force”.)