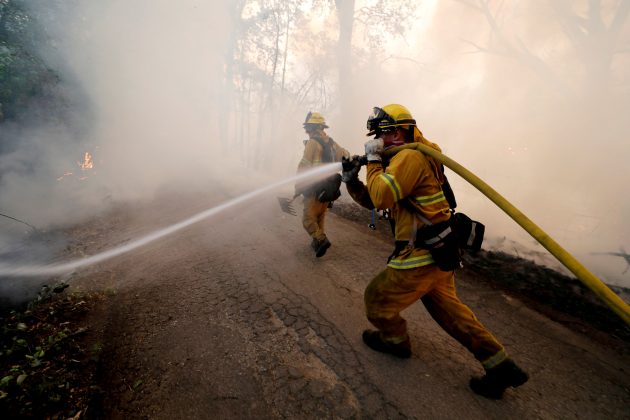 LOS ANGELES (Reuters) – Crews battling the second-largest wildfire ever recorded in California fought on Monday to keep flames from descending a ridge into foothill communities, as reinforcements arrived from as far away as Alaska.

The Mendocino Complex Fire, made up of two separate conflagrations that merged at the southern tip of the Mendocino National Forest, had burned 273,664 acres (110,748 hectares) as of Monday morning and was still growing, on track to potentially become the largest in state history.

“Unfortunately, they’re not going to get a break anytime soon,” National Weather Service meteorologist Brian Hurley said of firefighters who had cut buffer lines around 30 percent of the blaze as of Monday. “It’s pretty doggone hot and dry, and it’s going to stay that way.”

Hurley said some temperatures could reach 110 degrees (43 Celsius) in Northern California over the next few days with 15-mile-per-hour (24 kph) winds fanning the flames. Environmentalists and some politicians say the uptick in the intensity of the state’s wildfire season may be linked in part to climate change.

The Mendocino Complex, which has destroyed 75 homes and forced thousands to flee, is the largest of eight major wildfires burning out of control across California, prompting U.S. President Donald Trump on Sunday to declare a “major disaster” in the state.

“California wildfires are being magnified made so much worse by the bad environmental laws which aren’t allowing massive amount of readily available water to be properly utilized,” Trump wrote on Twitter.

A total of nearly 3,000 people were fighting the flames, including firefighters from Arizona, Washington, and Alaska.

Some 200 soldiers from the 14th Brigade Engineer Battalion at Joint Base Lewis-McChord near Tacoma, Washington, have also been called in to help in one of the most destructive fire seasons on record.

On Sunday, 140 fire managers and specialists from Australia and New Zealand underwent special training and were outfitted with safety gear at the National Interagency Fire Center in Boise before being deployed to battle fires in the Pacific Northwest and California.

Crews battling the Mendocino Complex on Monday were focusing on keeping flames from breaking through fire lines on a ridge above the foothill communities of Nice, Lucerne, Glen Haven, and Clearlake Oaks, said Tricia Austin of the California Department of Forestry and Fire Protection.

“If it were to be carried outside of those lines they have on the ridge, it could sweep down into those communities, that’s what we’re trying to prevent,” Austin said.

Elsewhere in California, the two-week-old Carr Fire on Saturday claimed the life of 21-year-old apprentice lineman Jay Ayeta, who died when his vehicle crashed as he worked with crews in dangerous terrain in Shasta County, according to PG&amp;E corporation.

He was the seventh person killed in that blaze, which has scorched more than 160,000 acres (64,750 hectares) in the scenic Shasta-Trinity region north of Sacramento.