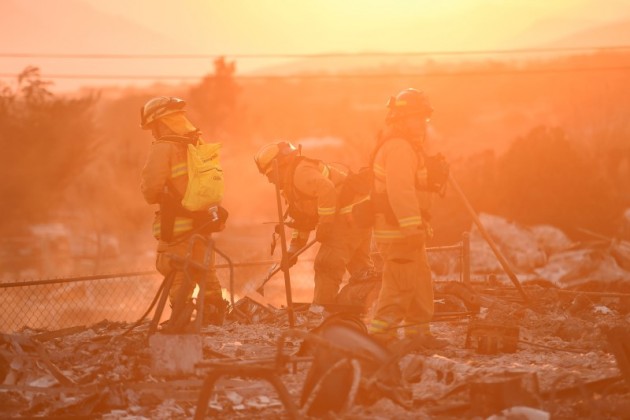 SOUTH LAKE, Calif. (Reuters) – Firefighters have begun to contain a wildfire in central California that has killed at least two people and destroyed 200 structures, fire officials said on Sunday, as six other blazes burned in the state in an already intense wildfire season.

The fire known as Erskine, about 110 miles (180 km) north of Los Angeles, smoldered over a wide area on Sunday after melting steel and reducing homes to ash in an intense conflagration on Thursday and Friday.

The Erskine fire was 10 percent contained after charring 36,810 acres, or nearly 60 square miles, the California Department of Forestry and Fire Protection (Cal Fire) said, adding it was expected to be contained by Thursday.

California Governor Jerry Brown declared a state of emergency for Kern County. In addition to the 200 destroyed structures, 75 homes have been damaged.

“Two fatalities have been confirmed. Additional fatalities are possible due to the extreme fire behavior during the initial hours of the incident,” the Kern County Fire Department said in a statement on Sunday. Investigators were studying a third set of charred remains to determine whether they were human.

More than 1,700 firefighters were working on the fire at the southern end of the Sierra Nevada range.

Hundreds of people from more than 10 communities were evacuated as Erskine spread rapidly on Thursday and Friday as winds drove it south and east from the Lake Isabella reservoir.

“I got out just as the flames were at my back fence,” said Terralyn Lehman, who is staying at a campground with her mother and her dog after their home in South Lake was destroyed.

She and her mother were awoken by the sound of a propane tank exploding. Lehman said her mother told her “‘grab your dog and go.’ So I did.”

Also on Sunday, a family returned to the wreckage of their burnt-out home in South Lake. Lucas Martin, his step-son and the young man’s girlfriend embraced each other after they managed to locate and retrieve a cherished family heirloom that withstood the inferno.

(Writing by Fiona Ortiz in Chicago; Editing by Dan Grebler and Kim Coghill)