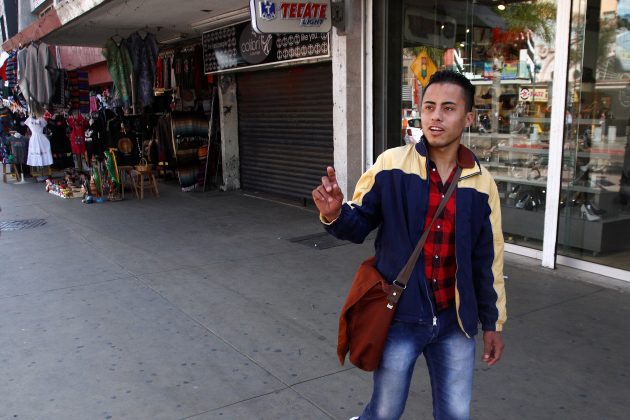 Honduran migrant Ariel, 19, who is waiting for his court hearing for asylum seekers returned to Mexico to wait out their legal proceedings under a new policy change by the U.S. government, is pictured after an interview with Reuters in Tijuana, Mexico March 18, 2019. Picture taken March 18, 2019. REUTERS/Jorge Duenes

By Lizbeth Diaz and Mica Rosenberg

TIJUANA/NEW YORK (Reuters) – A group of asylum seekers sent back to Mexico was set to cross the border on Tuesday for their first hearings in U.S. immigration court in an early test of a controversial new policy from the Trump administration.

The U.S. program, known as the Migrant Protection Protocols (MPP), turns people seeking protection in the United States around to wait out their U.S. court proceedings in Mexican border towns. Some 240 people – including families – have been returned since late January, according to U.S. officials.

Court officials in San Diego referred questions about the number of hearings being held on Tuesday to the U.S. Department of Homeland Security, which did not respond to a request for comment. But attorneys representing a handful of clients were preparing to appear in court.

Migrants like 19-year-old Ariel, who said he left Honduras because of gang death threats against himself and his family, were preparing to line up at the San Ysidro port of entry first thing Tuesday morning.

Ariel, who asked to use only his middle name because of fears of reprisals in his home country, was among the first group of asylum-seeking migrants sent back to Mexico on Jan. 30 and given a notice to appear in U.S. court in San Diego.

“God willing everything will move ahead and I will be able to prove that if I am sent back to Honduras, I’ll be killed,” Ariel said.

While awaiting his U.S. hearing, Ariel said he was unable to get a legal work permit in Mexico but found a job as a restaurant busboy in Tijuana, which does not pay him enough to move out of a shelter.

The American Civil Liberties Union (ACLU) and other advocacy groups are suing in federal court to halt the MPP program, which is part of a series of measures the administration of President Donald Trump has taken to try to curb the flow of mostly Central American migrants trying to enter the United States.

The Trump administration says most asylum claims, especially for Central Americans, are ultimately rejected, but because of crushing immigration court backlogs people are often released pending resolution of their cases and live in the United States for years. The government has said the new program is aimed at ending “the exploitation of our generous immigration laws.”

Critics of the program say it violates U.S. law and international norms since migrants are sent back to often dangerous towns in Mexico in precarious living situations where it is difficult to get notice about changes to U.S. court dates and to find legal help.

Immigration advocates are closely watching how the proceedings will be carried out this week, especially after scheduling glitches created confusion around three hearings last week, according to a report in the San Diego Union-Tribune.

The Executive Office for Immigration Review (EOIR), which runs U.S. immigration courts under the Department of Justice, said only that it uses its regular court scheduling system for the MPP hearings and did not respond to a question about the reported scheduling problems.

Gregory Chen, director of government relations at the American Immigration Lawyers Association, said there are real concerns about the difficulties of carrying out this major shift in U.S. immigration policy.

“The government did not have its shoes tied when they introduced this program,” he said.

(Reporting by Lizbeth Diaz in Tijuana and Mica Rosenberg in New York; Editing by Bill Trott)