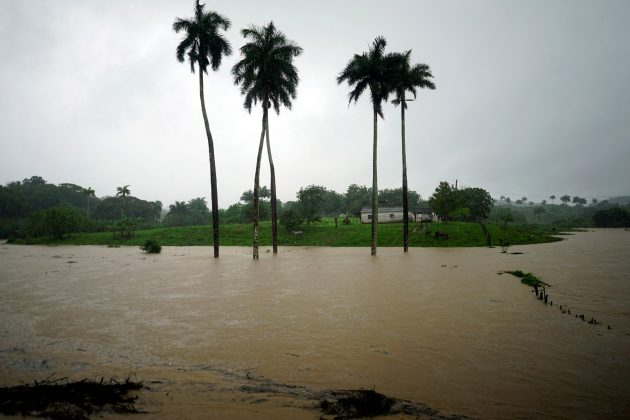 FILE PHOTO: A view of a partially flooded farm as Subtropical Storm Alberto passes by the west coast of Cuba, in Bahia Honda, Cuba, May 26, 2018. REUTERS/Alexandre Meneghini

HAVANA (Reuters) – Flooding in central Cuba caused by torrential rainfall in the wake of the subtropical storm Alberto has killed four people and prompted the evacuation of tens of thousands, Cuban state-run media said late on Tuesday.

After rain dumped more than 4 inches (10 cm) of water in 24 hours, flood waters swept away a bridge and damaged roads and other infrastructure, leaving many communities cut off and nearly 60,000 people without electricity, the media reported.

Authorities had to close down part of the national highway after a nearby river burst it banks when they opened the floodgates of the Palmarito reservoir because it had exceeded its maximum capacity.

Seventy-seven year old Cuban Quintiliano Simó Ortega died when trying to cross a flooded river by horseback in Trinidad on the south central coast to get to his farm, the Cuban News Agency reported.

This is the second crisis Diaz-Canel has faced since being selected six weeks ago to replace Raul Castro as Cuba’s president. The floods come 11 days after a plane crashed shortly after takeoff from Havana, killing 112.

On each occasion, he has appeared publicly at the forefront of the crisis management, striking a contrast that many Cubans have welcomed to Castro who operated behind the scenes.

Diaz-Canel was cited by state media as saying that authorities should focus on re-establishing basic services such as electricity and transportation when the weather started to improve.

Alberto, the first storm of the 2018 Atlantic hurricane season, which only officially starts on June 1, already weakened into a subtropical depression on Tuesday after making landfall in the south of the United States, according to the U.S. National Hurricane Center (NHC).

U.S. forecasters said last week they expected the 2018 Atlantic hurricane season to be near-normal to above-normal in number and intensity of storms.

Last year, Hurricane Irma killed at least 10 people during a devastating three-day rampage along the length of Cuba.