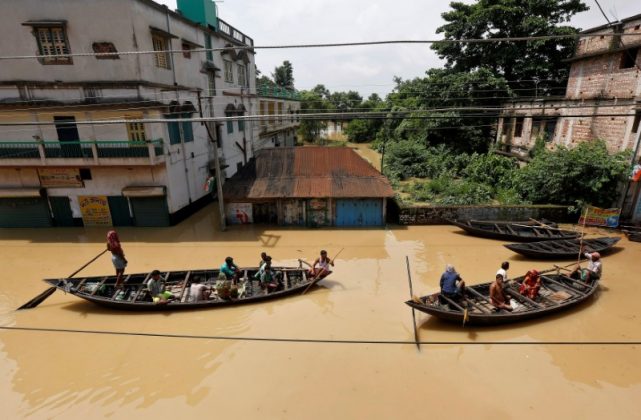 People use boats as they try to move to safer places along a flooded street in West Midnapore district, in West Bengal. REUTERS/Rupak De Chowdhuri

Torrential monsoon rain and flooding in recent weeks have killed at least 300 people in western and eastern states, an official in the National Disaster Management Authority told Reuters in New Delhi.

“Our teams are working in different parts of India with soldiers to ease the situation,” said Deepak Ghai, an emergency room control officer.

More than a million households had been affected and losses to farmlands were being assessed.

The airport in Ahmedabad, the main commercial hub of Gujarat, was partially flooded, forcing airlines to divert flights. More than 150 factories were forced to shut down, said A.R. Raval, a district administrator.

The floods have come at a particularly bad time for cotton farmers in Gujarat, Prime Minister Narendra Modi’s home state.

Raval said more than 50,000 were struggling to drain water from their land and homes.

“Cotton and millet harvests are expected to suffer in about three districts each in Gujarat and Rajasthan, but the biggest worry is that the extra moisture could lead to pest attacks in these areas,” Devinder Sharma, an independent farm expert, said.

Rains have been 4 percent above average since the four-month monsoon season began in June, according to the state-run India Meteorological Department.