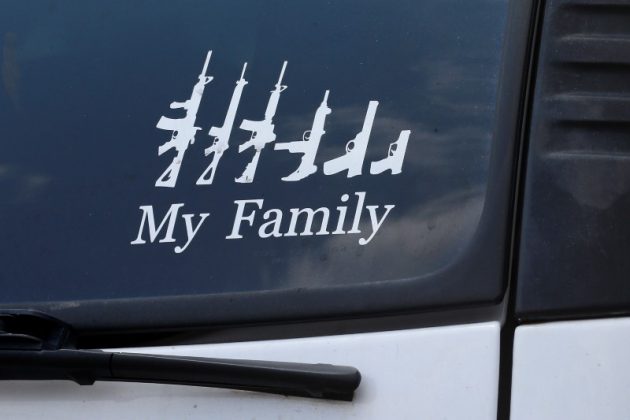 FILE PHOTO: A truck with a sticker indicating the number of weapons and hand guns is pictured in Port Saint Lucie, Florida, U.S. June 14, 2016. REUTERS/Carlo Allegri

By Letitia Stein and Bernie Woodall

(Reuters) – Florida lawmakers advanced a measure on Wednesday that could make it easier to avoid prosecution in deadly shootings and other use-of-force cases by seeking immunity on self-defense grounds under the state’s pioneering “stand your ground” law.

In a 74-39 vote, the state’s House of Representatives passed legislation that shifts the burden of proof from defendants to prosecutors when the law is invoked to avoid trial.

The measure now returns to the state Senate, which last month approved its own version of the bill. Both chambers are controlled by Republicans.

Florida’s “stand your ground” law, passed in 2005, received wide scrutiny and inspired similar laws in other states. It removed the legal responsibility to retreat from a dangerous situation and allowed use deadly force when a person felt greatly threatened.

Opponents say the measures will embolden gun owners to shoot first, citing the 2012 death of unarmed black teenager Trayvon Martin in Florida, which spurred national protests and the Black Lives Matter movement. The neighborhood watchman who killed him, George Zimmerman, was acquitted of murder after the law was included in jury instructions.

Supporters, including the National Rifle Association, the powerful U.S. gun lobby, see the legislation as bolstering a civilian’s right to quell an apparent threat.

“This bill is trying to put the burden of proof where it belongs, on the state, because all people are innocent before being proven guilty,” said the Republican sponsor of the bill, Representative Bobby Payne.

Florida’s law did not specify the process for applying “stand your ground” immunity. State courts established the current protocol, which calls for a pre-trial hearing before a judge and puts the burden of proof on the defendant.

Most of those speaking in the House debate were Democrats who said the bill would lead to more violence.

“Who will speak for the voiceless victims, silenced by an aggressor who claims he wasn’t an aggressor but is protected by a flawed law?” said Democrat Representative Bobby Dubose.

While public defenders support the changes to the law, the Florida Prosecuting Attorneys Association and gun control advocates oppose them.

“Every battery case, every domestic violence case, every use of force case, as a matter of routine, defense attorneys will now request hearings,” said Phil Archer, a state attorney.

Archer, a lifetime NRA member who teachers gun owners about “stand your ground,” said of the changes: “This is just going too far.”