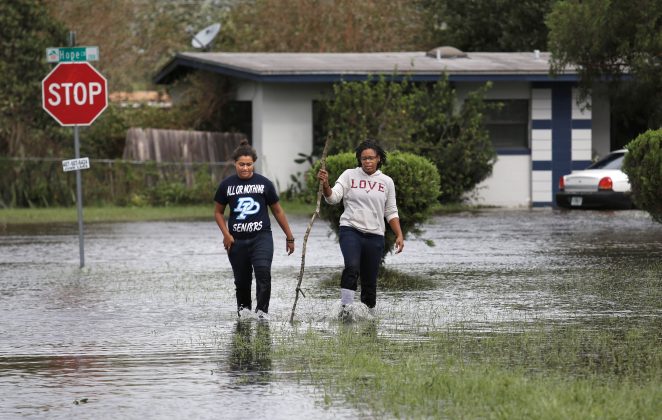 Residents walk through flood waters left in the wake of Hurricane Irma in a suburb of Orlando, Florida, U.S., September 11, 2017. REUTERS/Gregg Newton

By Andy Sullivan and Robin Respaut

FLORIDA CITY/MARCO ISLAND, Fla. (Reuters) – Shocked Florida residents returned to their shattered homes on Monday as the weakened Hurricane Irma pushed inland, flooding cities in the northeastern part of the state and leaving millions without power.

Downgraded to a tropical storm early on Monday, Irma had ranked as one of the most powerful Atlantic hurricanes recorded. It cut power to millions of people and ripped roofs off homes as it hit a wide swath of Florida on Sunday and Monday and moved into neighboring states.

Authorities said the storm had killed 39 people in the Caribbean and one in Florida, a man found dead in a pickup truck that had crashed into a tree in high winds on the Florida Keys over the weekend.

With sustained winds of up to 60 mph (100 kph), Irma had crossed into Georgia and was located about 47 miles (76 km)northeast of the Florida state capital Tallahassee, the National Hurricane Center said at 2 p.m. ET.

In Miami’s Little Haiti neighborhood, people returned to the wreckage of trailers shredded by the storm after the city escaped the worst of Irma’s winds but experienced heavy flooding.

Melida Hernandez, 67, who had ridden out the storm at a nearby church, found her home split down the middle by a tree.

“I wanted to cry, but this is what it is, this is life,” Hernandez said.

High winds snapped power lines and left about 7.3 million homes and businesses without power in Florida and elsewhere in the U.S. Southeast, state officials and utilities said. They said it could take weeks to complete repairs.

Miami International Airport, one of the busiest in the country, halted passenger flights through at least Monday.

Some residents who had evacuated the Florida Keys archipelago, where Irma roared ashore on Sunday with winds up to 130 mph (209 kph), grew angry as they tried to return to their homes on Monday.

A few dozen people argued with police who turned them away from the first of a series of bridges leading to the island chain, which officials warned still lacked power, water and cellphone service.

White House homeland security adviser Tom Bossert said it might be weeks before many residents of the Keys were able to return. “The Keys are going to take a while,” Bossert told a regular White House briefing. “I would expect that the Keys are not fit for re-entry for regular citizenry for weeks.”

Irma hit Florida after powering through the Caribbean as a rare Category 5 hurricane. It killed 39 people there, including 10 in Cuba, which was battered over the weekend by ferocious winds and 36-foot (11-meter) waves.

Northeastern Florida cities including Jacksonville were flooding on Monday, with police pulling residents from waist-deep water.

“Stay inside. Go up. Not out,” Jacksonville’s website warned residents. “There is flooding throughout the city.”

The city also warned residents to be wary of snakes and alligators driven into the floodwater.

That estimate, lower than earlier forecasts of up to $50 billion in insured losses, helped spur a relief rally on Wall Street as fears eased that Irma would cut into U.S. economic growth.

Shares of insurance companies were among the big winners, with Florida-based Federated National, HCI Group and Universal Insurance all up more than 12 percent.

Some 6.5 million people, about one-third of Florida’s population, had been ordered to evacuate their homes ahead of Irma’s arrival. More than 200,000 people sought refuge in about 700 shelters, according to state data.

As shelters began to empty on Monday, some 7,000 people filed out of Germain Arena in Estero, south of Fort Myers. The crowd included Don Sciarretta, who rode out the storm with his 90-year-old friend, Elsie Johnston, who suffers from Alzheimer’s disease.

Sciarretta, 73, spent two days without sleep, holding up a slumped-over Johnston and making sure she did not fall out of her chair. He relied on other people in the shelter to bring the pair food, often after waiting in hours-long lines.

“For the next storm, I’ll go somewhere on my own like a hotel or a friend’s house,” Sciarretta said. “I’m not going through this again.”

Shelters across western Florida opened, filled up – and often closed because of overcrowding – after the storm made a western shift on Saturday.

U.S. President Donald Trump, attending a ceremony at the Pentagon on the 16th anniversary of the Sept. 11 attacks, vowed a full response to Irma as well as ongoing federal support for victims of Hurricane Harvey, which flooded Texas.

“These are storms of catastrophic severity and we are marshalling the full resources of the federal government to help our fellow Americans,” Trump said.

On Marco Island, where the storm made its second landfall on Sunday, residents were cleaning up damaged homes and dealing with the downed trees that knocked out power lines and crushed cars.

Salvatore Carvelli, Jr., 45, rode out the storm in DaVinci’s, his Italian restaurant.

“It sounded like a train going through,” Carvelli said.

The winds tore the air conditioner from his restaurant’s roof, he said, adding that the storm surge added to the danger.

“There was no road that you could see,” Carvelli said. “The parking lot was gone, you could fish.”