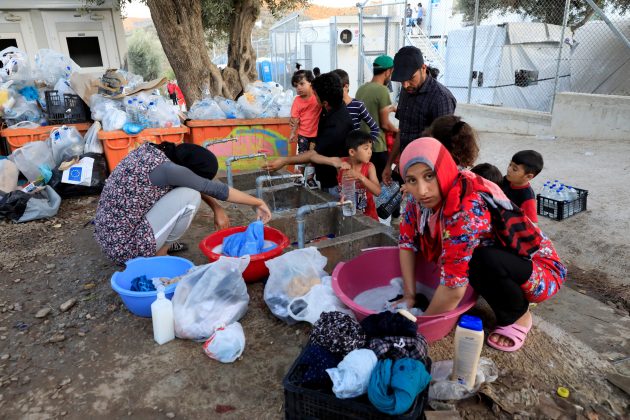 Migrants wash their clothes and fill bottles with water at a makeshift camp next to the Moria camp for refugees and migrants on the island of Lesbos, Greece, September 18, 2018. REUTERS/Giorgos Moutafis

LESBOS, Greece (Reuters) – Hundreds of asylum-seekers stranded on Greece’s Lesbos island are living in makeshift tents in a field overrun by garbage, without electricity or running water.

Moria, Greece’s biggest migrant camp in a former military base on the island, is holding 9,000 people, nearly three times its capacity, according to the latest government data. 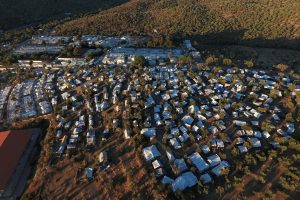 A view of the Moria camp for refugees and migrants and a makeshift camp set next to Moria, on the island of Lesbos, Greece, September 19, 2018. REUTERS/Giorgos Moutafis

Aerial footage obtained by Reuters shows several dozen tents have spilled over into an adjacent olive grove, where hundreds of asylum-seekers, most of them Afghan, live in grim conditions.

Young children with muddied faces play among piles of rubbish and women wash clothes and plates in buckets of murky water. Others break off tree branches to shelter their tents from the elements.

“The situation is so bad here,” said Ali, an Afghan asylum-seeker who arrived in Greece with his three children in August. “Night is so bad … my children cannot go to the toilet because everywhere it is dark here and we are in a forest.”

Greece has said it will move 2,000 asylum-seekers from the island to the mainland by the end of the month as aid groups increased pressure on the government to ease the overcrowding.

A local governor threatened to shut Moria down next month unless authorities clean up what health inspectors described as “uncontrollable amounts of waste.” 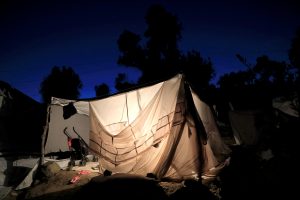 A tent is illuminated at a makeshift camp next to the Moria camp for refugees and migrants on the island of Lesbos, Greece, September 18, 2018. REUTERS/Giorgos Moutafis

In Athens on Wednesday, the European Union’s top migration official, Dimitris Avramopoulos, said it was an EU “priority to create the best possible conditions on the islands”.

Small numbers of migrant boats arrive on Lesbos and other Greek islands near Turkey every week, though they are a fraction of the nearly 1 million people who landed in Greece in 2015.