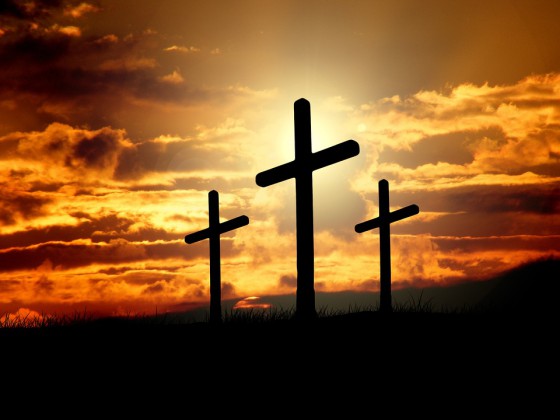 Three crosses in front of a sunset.

2 Corinthians 6:2 God says, “At the right time I heard your prayers. On the day of salvation, I helped you.” I tell you that the “right time” is now, and the “day of salvation” is now. (NCV)

This Easter season we can no longer focus on our holiday traditions. This year will not be one of creating memories by gathering in our churches, Easter egg hunts and meals with all of our family and friends. We are on pause. The world is holding its breath for salvation and we are living in a time that is unprecedented. We wake each morning to lives that have been altered, no longer ‘normal’. There is fear, exhaustion, and uncertainty in every country, and in every nation. No souls have been left untouched by this worldwide emergency.

This is the time when the sacrifice of Jesus for our sins, when the miracles of His life, His teachings, should mean more to us than ever before. His message of the unsurmountable love that God has for us was shown by Christ’s suffering on the cross. He died so we may live.

John 3:16 “For God so loved the world that He gave His only begotten Son, that whoever believes in Him should not perish, but have eternal life.

Today on this Holy Good Friday, reflect on that love and find hope. Let us sit silently with the Lord, look within His Word and walk with Jesus in His agony for us. Today we fall to our knees and Thank you God for the hope that is in your son, Jesus Christ our Lord.

Jesus Questioned by Pilate
11 Jesus stood before the governor. And the governor asked Him, “Are You the King of the Jews?”

Jesus said to him, “You have said so.”

12 When He was accused by the chief priests and elders, He gave no answer. 13 Then Pilate said to Him, “Do You not hear how many things they testify against You?” 14 But He never answered him a word, so that the governor was greatly amazed.

Jesus Sentenced to Die
15 Now at the feast, the governor was accustomed to releasing to the people a prisoner whom they chose. 16 They had then a notorious prisoner called Barabbas. 17 So when they had gathered together, Pilate said to them, “Whom do you want me to release to you—Barabbas, or Jesus who is called Christ?” 18 For he knew that they had handed Him over out of envy.

19 When he was sitting on the judgment seat, his wife sent word to him, “Have nothing to do with that righteous Man, for I have suffered much today in a dream on account of Him.”

20 But the chief priests and elders persuaded the crowd to ask for Barabbas and kill Jesus.

21 The governor answered, “Which of the two do you want me to release to you?”

22 Pilate said to them, “Then what shall I do with Jesus who is called Christ?”

They all said to him, “Let Him be crucified!”

But they cried out all the more, “Let Him be crucified!”

24 When Pilate saw that he could not prevail, but rather that unrest was beginning, he took water and washed his hands before the crowd, saying, “I am innocent of the blood of this righteous Man. See to it yourselves.”

25 Then all the people answered, “His blood be on us and on our children!”

26 Then he released Barabbas to them. But when he had scourged Jesus, he handed Him over to be crucified.

The Soldiers Mock Jesus
27 Then the soldiers of the governor took Jesus into the Praetorium, and gathered the whole detachment of soldiers before Him. 28 They stripped Him and put a scarlet robe on Him, 29 and when they wove a crown of thorns, they put it on His head and put a staff in His right hand. They knelt before Him and mocked Him, saying, “Hail, King of the Jews!” 30 They spit on Him, and took the staff and hit Him on the head. 31 After they had mocked Him, they took the robe off Him, put His own garments on Him, and led Him away to crucify Him.

The Crucifixion
32 As they came out, they found a man of Cyrene, Simon by name. This man they compelled to bear His cross. 33 When they came to a place called Golgotha, which means The Place of the Skull, 34 they gave Him sour wine mingled with gall to drink. But when He tasted it, He would not drink it. 35 When they crucified Him, they divided His garments by casting lots to fulfill what was spoken by the prophet, “They divided My garments among themselves and for My clothing they cast lots.”[a] 36 And sitting down, they kept watch over Him there. 37 They put His accusation over His head, which read:

THIS IS JESUS THE KING OF THE JEWS.

38 Then two thieves were crucified with Him, one on the right and another on the left. 39 Those who passed by insulted Him, wagging their heads, 40 saying, “You who would destroy the temple and build it in three days, save Yourself! If You are the Son of God, come down from the cross.” 41 Likewise, the chief priests, with the scribes and elders, mocked Him, saying, 42 “He saved others. He cannot save Himself. If He is the King of Israel, let Him now come down from the cross, and we will believe Him. 43 He trusted in God. Let Him deliver Him now, if He will have Him. For He said, ‘I am the Son of God.’ ” 44 Even the thieves who were crucified with Him insulted Him in the same way.

The Death of Jesus
45 Now from the sixth hour until the ninth hour there was darkness over all the land. 46 About the ninth hour Jesus cried out with a loud voice, “Eli, Eli, lama sabachthani?” which means, “My God, My God, why have You forsaken Me?”

47 Some of those who stood there heard it and said, “This Man is calling for Elijah.”

48 Immediately one of them ran, took a sponge, filled it with wine, and put it on a stick, and gave it to Him to drink. 49 The rest said, “Leave Him alone. Let us see if Elijah will come to save Him.”

50 And Jesus, when He had cried out again with a loud voice, released His spirit.

51 At that moment the curtain of the temple was torn in two, from the top to the bottom. And the ground shook, and the rocks split apart. 52 The graves also were opened, and many bodies of the saints who had died were raised, 53 and coming out of the graves after His resurrection, they went into the Holy City and appeared to many.

54 When the centurion and those with him, keeping watch over Jesus, saw the earthquake and what took place, they feared greatly and said, “Truly He was the Son of God!”

55 Many women who were there watching from afar followed Jesus from Galilee, serving Him, 56 among whom was Mary Magdalene, and Mary the mother of James and Joseph, and the mother of Zebedee’s sons.

The Burial of Jesus
57 When the evening came, there came a rich man of Arimathea, named Joseph, who also was a disciple of Jesus. 58 He went to Pilate and asked for the body of Jesus. Then Pilate commanded the body to be given to him. 59 When Joseph had taken the body, he wrapped it in a clean linen cloth, 60 and laid it in his own new tomb, which he had cut out of the rock. And he rolled a large stone to the door of the tomb and departed. 61 Mary Magdalene and the other Mary were there, sitting opposite the tomb.

The Guard at the Tomb
62 The next day, following the Day of Preparation, the chief priests and Pharisees gathered before Pilate, 63 saying, “Sir, we remember that deceiver saying while He was still alive, ‘After three days I will rise.’ 64 Therefore command that the tomb be made secure until the third day, lest His disciples come by night and steal Him away, and tell the people, ‘He has risen from the dead.’ The last deception will be worse than the first.”

In three days the rock will have been rolled away and Jesus will have risen! God’s promises are true! Hold on to each other, pray for one another and lift your hearts to Him with Joy!

Never forget, God loves you, He really does!