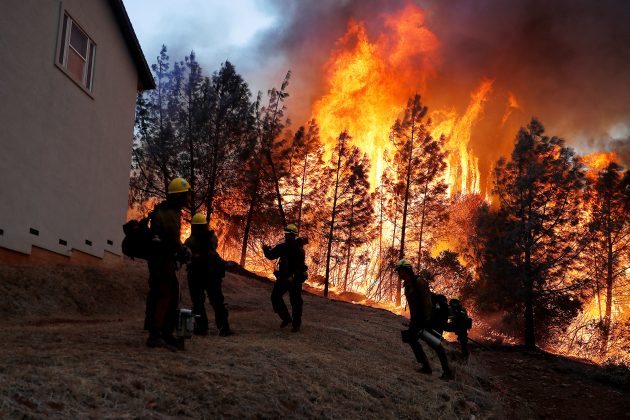 FILE PHOTO: A group of U.S. Forest Service firefighters monitor a back fire while battling to save homes at the Camp Fire in Paradise, California, U.S. November 8, 2018. REUTERS/Stephen Lam/File Photo

MUNICH (Reuters) – Forest fires are becoming increasingly likely because of climate change and cost insurers more than ever, with the deadly fire that ravaged northern California the single most expensive natural disaster in 2018, Munich Re said on Tuesday.

The California wildfire that devastated the small town of Paradise in November caused losses of $16.5 billion, of which $12.5 billion were insured, according to the reinsurer’s annual catastrophe report.

Worldwide natural disasters caused $160 billion in economic damage in 2018. That was down from $350 billion the previous year, but a number of devastating hurricanes had contributed to the high losses in 2017.

Insurers and reinsurers paid out $80 billion for natural disaster claims last year, down from $140 billion a year earlier but almost double the 30-year average of $41 billion, the reinsurer said.

Munich Re board member Torsten Jeworrek said that 2018 was marked by several severe natural disasters with high insured losses.

“These include the unusual coincidence of severe cyclones in the U.S. and Japan, and devastating forest fires in California,” he said, adding that climate change appears to be making such large fires more common.

Insurers spent $18 billion on two huge fires in the United States in 2018 – equivalent to one in every four dollars they paid out as a result of natural disasters.

“Higher and higher temperatures are leading to ever greater droughts, and high humidity in the winter means that shrubbery grows quickly, creating an easily flammable material in dry summers,” he said.

Rauch said it was questionable whether areas at high risk could continue to be populated without taking additional measures, such as building houses further from forests and with better safety standards.

In Europe, an unusually hot summer caused a drought that wrought considerable damage on the agricultural sector and was the continent’s most expensive natural disaster at $3.9 billion. However, only a fraction of those losses were insured.

Reinsurers act as a financial backstop to insurance companies, paying a chunk of the big claims for storms or earthquakes in exchange for part of the policy premiums.

Hurricanes and typhoons caused $56 billion of damage last year. Hurricane Michael, which wrought devastation in Florida, was the most expensive for insurers, causing losses of $10 billion.

The review gave no claims figures for Munich Re itself. The reinsurer is due to report fourth-quarter results on Feb. 6.