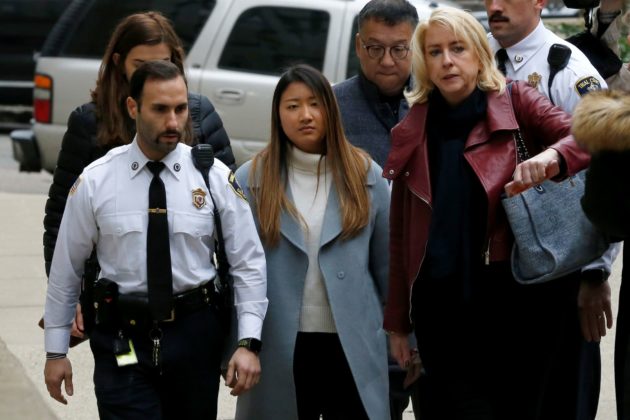 BOSTON (Reuters) – A former Boston College student pleaded not guilty on Friday to charges of involuntary manslaughter stemming from what prosecutors said was her role in encouraging her boyfriend to commit suicide.

A lawyer for Inyoung You, 21, entered the plea on her behalf during a hearing in Suffolk County Superior Court after she returned from South Korea to face charges brought last month over the May 20 suicide of her college boyfriend, who leaped to his death from a parking garage hours before his graduation.

Prosecutors point to thousands of text messages that You exchanged with Alexander Urtula as evidence showing she was physically, verbally and psychologically abusive to the 22-year-old and told him to “go kill himself” and to “go die.”

Prosecutors say an investigation found that You used attempts and threats of self-harm to herself to control Urtula and isolate him from friends and family. They say she was also aware of his suicidal thoughts when she encouraged him to kill himself.

Urtula spent the night before his death with You in her dorm room, Grasso said.

After Urtula the next day texted her and his brother saying he was going to take his own life, You used her cellphone to track his location to a parking garage in the Roxbury neighborhood of Boston and was on its roof when he jumped, Grasso said.

Earlier this week, You through a public relations firm released to the Boston Globe text messages she exchanged with Urtula the day of his death suggesting she tried to stop him and sought to have his brother intervene.

The allegations bore similarities to the high-profile Massachusetts case of Michelle Carter, who was convicted in 2017 of involuntary manslaughter and accused of goading her teenage boyfriend into committing suicide with text messages and phone calls.

The Massachusetts Supreme Judicial Court upheld her conviction in February. Her lawyers call the case an “unprecedented” instance of someone being convicted involuntary manslaughter based on words alone and have asked the U.S. Supreme Court to overturn it.