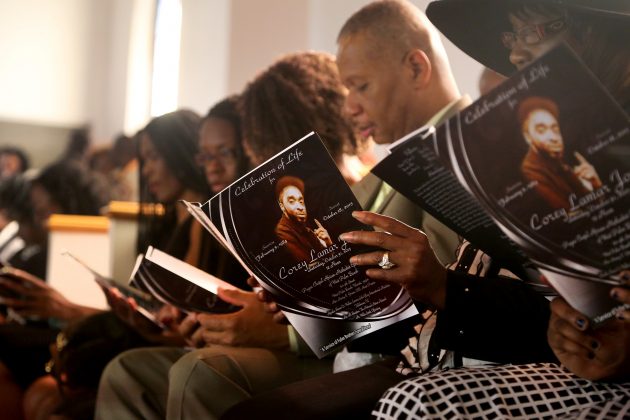 (Reuters) – A Florida jury on Thursday convicted a former police officer for manslaughter and attempted first-degree murder in the fatal 2015 shooting of a black motorist who was waiting for his car to be towed off the highway.

Nouman Raja, 41, was charged in 2016 after a grand jury found he had used unjustified force when he shot and killed 31-year-old Corey Jones while wearing plainclothes on a highway exit ramp in West Palm Beach. Prosecutors said he did not identify himself as a police officer.

Raja looked distraught as the jury read their verdict after five hours of deliberations, then he was placed in handcuffs and escorted out of the courtroom. He faces a maximum sentence of life in prison when he is sentenced on April 26.

Relatives of Jones left the West Palm Beach courtroom in tears, hugging each other and raising their hands in praise.

Prosecutor Adrienne Ellis thanked the jury for their service.

“They’re a smart group and they were fair,” Ellis said. “When I say I’m speechless, it’s because I’m overwhelmed with just gratitude.”

Raja’s lawyer, Richard Lubin, had argued on Wednesday that the police officer feared for his life when Jones pulled out a gun during the roadside encounter, according to WPEC CBS12 News.

Lubin did not immediately respond to a request for comment on Thursday.

Raja was driving an unmarked van when he approached Jones early on Oct. 18, 2015, and fired six shots at the victim within 13 seconds, according to prosecutors.

Jones, who was a drummer, had pulled out a .380-caliber handgun that he had legally purchased three days earlier. He was hit three times and died of a gunshot wound to his chest.

Audio from the incident was captured on a recording of a roadside assistance call that Jones had placed before Raja arrived. According to prosecutors, the recording showed that Raja did not identify himself as a police officer.

Protesters held a peaceful rally in Palm Beach Gardens four days after Jones was killed, and dozens of mourners attended his funeral more than a week later.

Reverend Al Sharpton was among those who spoke at the memorial service, where the pallbearers wore hats and jerseys of the National Football League’s Oakland Raiders, Jones’ favorite team.

Lawyers for Jones’ family, including civil rights attorney Benjamin Crump, said in a statement that the verdict was “a vindication of the good man that was Corey Jones, and an utter repudiation of a criminal who tried to hide behind a badge.”