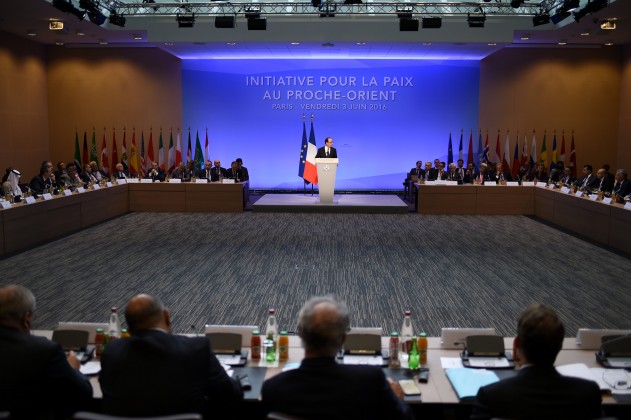 French President Francois Hollande delivers a speech during an international and interministerial conference in a bid to revive the Israeli-Palestinian peace process, in Paris, France, June 3, 2016. REUTERS/Stephane de Sakutin/Pool

PARIS (Reuters) – France’s president said on Friday that spiraling Middle East upheaval since the collapse of the round of Israel-Palestinian peace talks has complicated the process and makes it even more urgent bring the two sides back to the table.

With U.S. efforts to broker Israeli-Palestinian peace in deep freeze for two years and Washington focused on its November presidential election, France lobbied for an international conference that began on Friday with the aim of breaking the apathy over the impasse and stir new diplomatic momentum.

While Palestinians have supported the French initiative, Israeli officials have said it is doomed to fail and that only direct negotiations can lead to a solution to the generations-old conflict.

Neither Israel nor the Palestinians have been invited to the conference, though the objective is to get them to negotiate after the U.S. elections.

“The discussion on the conditions for peace between Israelis and Palestinians must take into account the entire region,” Francois Hollande told delegates at the opening of the conference in Paris.

“The threats and priorities have changed,” he said, alluding to escalating Middle East conflict that has engulfed Syria, Iraq, Yemen, Turkey’s mostly Kurdish southeast and the spread of Islamic State insurgents through wide swathes of the region.

“The changes make it even more urgent to find a solution to the conflict, and this regional upheaval creates new obligations for peace,” Hollande said.

The European Union’s foreign policy chief, Federica Mogherini, seconded Hollande’s call and said it was the duty of

international and regional players to find a breakthrough since the two sides appeared incapable of doing so alone.

“The policy of settlement expansion and demolitions, violence, and incitement tells us very clearly that the perspective that Oslo opened up is seriously at risk of fading away,” Mogherini told reporters.

The interim 1993 Oslo peace accords forged by Yitzhak Rabin and Yasser Arafat were meant to yield a Palestinian state in Israeli-occupied territory within five years – the so-called “two state solution”.

She said the Middle East Quartet of the EU, Russia, the United States and United Nations was finalizing recommendations on what should be done to create incentives and guarantees for Israel and the Palestinians to negotiate in good faith.

“The policy of settlement expansion and demolitions, violence, and incitement tells us very clearly that the perspective that Oslo opened up is seriously at risk of fading away,” Mogherini added.

Previous attempts to coax the foes into a deal have been fruitless. The Palestinians say Israeli settlement expansion in occupied territory is dimming any prospect for the viable state they seek in the West Bank and Gaza Strip, with a capital in Arab East Jerusalem.

Israel has demanded tighter security measures from the Palestinians and a crackdown on militants who have attacked Israeli civilians or threaten their safety. It also says Jerusalem is Israel’s indivisible capital.

U.S. Secretary of State John Kerry, whose exhaustive mediation of the last peace talks stumbled on the two sides’ intransigence, appeared lukewarm to the French initiative when asked if it could lead to fresh face-to-face talks.

“We’ll see, we’ll have that conversation, we have to know where it’s going, what’s happening. We’re just starting, let’s get into the conversations,” he told reporters.

(Additional reporting by Dan Williams in Jerusalem and Yeganeh Torbati in Washington; Editing by Mark Heinrich)