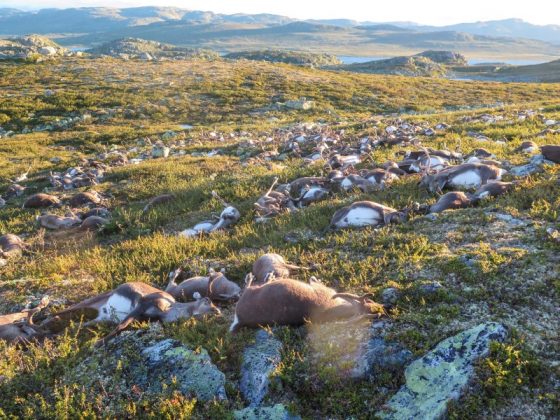 Dead wild reindeer are seen on Hardangervidda in Norway, after lightning struck the central mountain plateau and killed more than 300 of them, in this handout photo received on August 28, 2016. Havard Kjotvedt/SNO/Miljodirektoratet/NTB Scanpix via Reuters

OSLO (Reuters) – A freak lightning storm has killed 323 reindeer in a remote mountainous area of Norway, officials said on Monday.

Dead animals were found lying on top of each other, many with their antlers entangled, after the thunderstorm on the Hardanger plateau in southern Norway on Friday.

“We’ve never had anything like this with lightning,” Kjartan Knutsen of Norway’s nature surveillance agency said, adding there were sometimes isolated cases of sheep or reindeer struck down.

Reindeer tend to group together when in danger. It was unclear whether the herd had been killed by a single lightning bolt or several.

“The high moisture in both the ground and the air was probably an explanation for why so many animals died,” Olav Strand, a senior researcher at the Norwegian Institue for Nature Research, wrote in a statement.

Experts flew in by helicopter to take samples of the dead reindeer, amid a rising stench of decay, as part of a project to monitor elk and deer for diseases. Five of the 323 animals were found alive but badly injured and were shot by wildlife officials.

It was unclear what would happen to the bodies. One option is to leave them to decay.

“It’s part of the natural ecology, this is far from where people live,” Knutsen said. Hardanger has about 12,000 reindeer and hunters are allowed to shoot 2,000 a year for their meat.