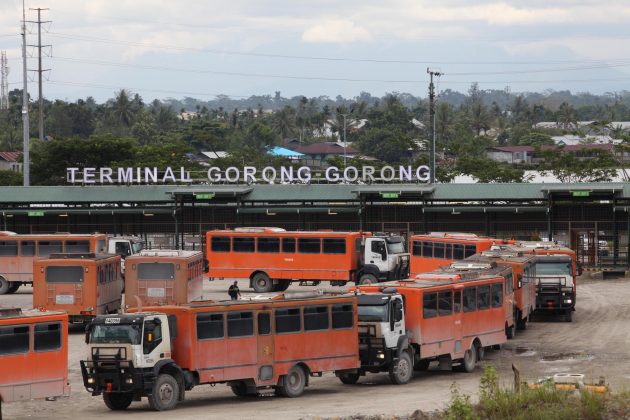 Vehicles used for transporting workers to the Grasberg copper mine operated by Freeport McMoRan Inc are seen at the Gorong-Gorong terminal in Timika, Mimika, Papua province, Indonesia on November 16, 2017. REUTERS/Muhammad Yamin

TIMIKA, Indonesia (Reuters) – U.S. miner Freeport-McMoRan Inc is evacuating spouses and children of workers from its giant Indonesian copper mine after a string of shootings in the area raised security concerns.

The move follows efforts by Indonesian authorities on Friday to evacuate villages near Freeport’s Grasberg mine in the eastern province of Papua that authorities said had been occupied by armed separatists.

Since August at least 12 people have been injured and two police officers have been killed by gunmen with suspected links to separatist rebels.

Freeport has asked family and household members of its employees to prepare over the weekend for a temporary relocation from the mining town of Tembagapura, about 10 km (6.2 miles) from Grasberg, company sources said. Workers have been asked to stay behind and maintain their work schedule, they said.

Details of the evacuation or the number of people impacted were not immediately clear. Shots were fired at a light vehicle and two large mining trucks were set on fire at Grasberg on Saturday, one of the sources said. The sources declined to be named as they were not authorized to talk to the media.

Freeport in a statement on Saturday confirmed the evacuation plan and said it will be carried out immediately.

“We are working closely with government and law enforcement to ensure the safety of our people and those in the communities we support, and to bring about the return of peace and stability as soon as possible,” it said.

Grasberg is the world’s second-largest copper mine by volume.

The separatist West Papua National Liberation Army (TPN-OPM) says it is at war with Indonesian authorities and wants to “destroy” Freeport in an effort to gain sovereignty for the region.

TPN-OPM has claimed responsibility for the shootings but denies police allegations it took civilian hostages.

(Reporting by Sam Wanda in TIMIKA; Writing by Fransiska Nangoy and Fergus Jensen in JAKARTA; Editing by Muralikumar Anantharaman)