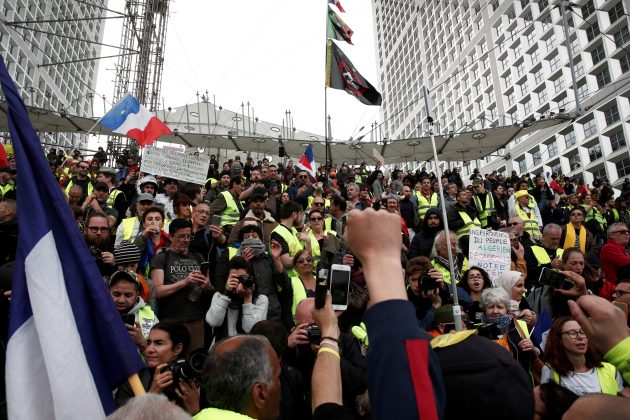 PARIS (Reuters) – The French interior minister warned on Friday that violence could flare up on the 23rd Saturday of yellow-vest protests, as authorities banned marches around the fire-gutted Notre-Dame cathedral.

The warning comes after weeks of relative calm, with the marches attracting declining numbers as yellow-vest protesters waited for President Emmanuel Macron’s expected response to their various demands which include lower taxes and more government services.

Christophe Castaner, the interior minister, said domestic intelligence services had informed him of a potential return of rioters intent on wreaking havoc in Paris, Toulouse, Montpellier and Bordeaux, in a repeat of violent protests on March 16.

That day, hooded gangs ransacked stores on Paris’s famed Champs-Elysees avenue, set fire to a bank and forced Macron to cut short a ski trip in the Pyrenees.

“The rioters will be back tomorrow,” Castaner told a press conference. “Their proclaimed aim: a repeat of March 16,” he said. “The rioters have visibly not been moved by what happened at Notre-Dame.”

Castaner said that planned marches that would have come near the medieval church on the central island on the Seine river had been banned, while one march from Saint-Denis, north of Paris, to Jussieu university on the Left Bank, had been authorized.

The catastrophic fire at Notre-Dame cathedral on Monday, one of France’s best-loved monuments, prompted an outpouring of national sorrow and a rush by rich families and corporations to pledge around 1 billion euro ($1.12 billion)for its reconstruction.

That has angered some yellow-vest protesters, who have expressed disgust at the fact their five-month-old movement, which started as an anti-fuel tax protest last year, has not received the same generous donations by France’s elite.

“I’m sorry, and with all due respect to our heritage, but I am just taken aback by these astronomic amounts!” Ingrid Levavasseur, one of the yellow vests’ most recognizable public faces, said on her Facebook page.

“After five months on the streets, this is totally at odds with what we have seen,” she said.

The yellow vest movement poses the biggest challenge so far to Macron’s authority two years into his presidency.

The French leader was due to unveil policies to quell the grassroot movement on Monday, before the blaze at Notre-Dame forced him to cancel the speech. He has yet to set a new date for the announcements.