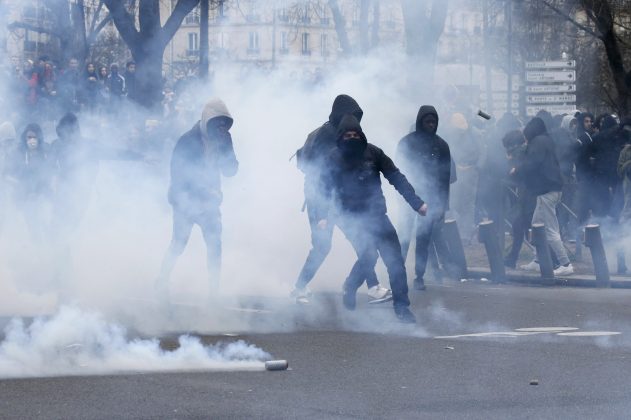 Clouds of tear gas surround youths as they face off with French police during a demonstration against police brutality after a young black man, 22-year-old youth worker named Theo, was severely injured during his arrest earlier this month, in Paris, France, February 23, 2017. REUTERS/Gonzalo Fuentes

PARIS (Reuters) – Hundreds of French high-school students staged an unauthorized anti-police rally on Thursday, blocking the entrances to a dozen schools in Paris in the latest in a series of protests over the alleged rape of a young black man with a police baton.

Police reported eight arrests after isolated skirmishes with youths who hurled objects and damaged property on the fringes of what otherwise appeared to have been a relatively peaceful demonstration.

The protest comes two months before a presidential election where far-right leader Marine Le Pen, leader of the anti-immigrant National Front party, is tipped to win the first round but lose the runoff vote that takes place on May 7.

The Paris school authority said more than 10 schools had been targeted by youths who piled up rubbish bins and other objects at the entrance gates. In one case, a deputy school director was injured when protesters hurled a fire extinguisher.

The protesters are angry over the alleged rape of the 22-year-old man during a Feb. 2 arrest in an area north of Paris where large numbers of immigrants live. The man, identified only as Theo, remains in hospital with injuries to his anus and head.

He has called for public calm and his family has said they have faith in the French justice system.

One of the banners carried at Thursday’s rally read “Revenge for Theo!”

Social media networks showed signs of skirmishes on the fringes of the rally in the Place de la Nation square in the east of Paris, where riot police in protective gear advanced on groups of mostly-hooded youths in sidestreet confrontations.

A helicopter flew overhead and tear gas clouds rose into the air above that square toward the end of the rally.

The Paris police department had warned people to stay away from the protest, saying it was not authorized and that there was a risk of violent groups causing trouble, as happened over the last three weeks.

Four police officers have been suspended pending an inquiry into the Feb. 2 incident. One has been placed under formal investigation for suspected rape and three others for unnecessary use of force.

So far the protests have not snowballed to the extent of the unrest that 12 years ago drew global attention to the stark contrast between wealthy Paris and the suburbs that surround it.