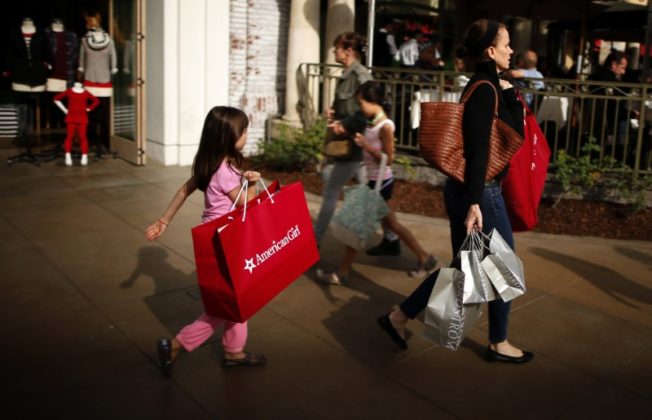 WASHINGTON (Reuters) – The U.S. economy likely hit a soft patch in the first quarter as an unseasonably warm winter and rising inflation weighed on consumer spending, in a potential setback to President Donald Trump’s promise to boost growth.

The Atlanta Federal Reserve is forecasting the economy growing at only a 0.2 percent rate in the first quarter, which would be the weakest performance in three years.

The economy grew at a 2.1 percent pace in the fourth quarter. The government will publish its advance first-quarter GDP estimate on Friday at 8:30 a.m. The expected sluggish first-quarter growth pace, however, is not a true picture of the economy’s health.

The labor market is near full employment and consumer confidence is near multi-year highs, suggesting that the mostly weather-induced slowdown in consumer spending is probably temporary. First-quarter GDP tends to underperform because of difficulties with the calculation of data that the government has acknowledged and is working to rectify.

“The weakness is not a reflection of the underlying health of the economy, part of it is residual seasonality,” said Ryan Sweet, a senior economist at Moody’s Analytics in West Chester, Pennsylvania. “It has become more understood over the past few years, that’s why people often discount first-quarter GDP.”

Even without the seasonal quirk and temporary restraints, economists say it would be difficult for Trump to fulfill his pledge to raise annual GDP growth to 4 percent, without increases in productivity.

On Wednesday, the Trump administration proposed a tax plan that includes cutting the corporate income tax rate to 15 percent from 35 percent, but offered no details.

Economists estimate that growth in consumer spending, which accounts for more than two-thirds of U.S. economic activity, braked to below a 1.0 percent rate in the first quarter. That would be the slowest pace in nearly four years and follows the fourth quarter’s robust 3.5 percent growth rate.

The expected weakness in consumer spending is blamed on a mild winter, which undermined demand for heating and utilities production. Higher inflation, which saw the consumer price index averaging 2.5 percent in the first quarter, also hurt spending.

Government delays issuing income tax refunds to combat fraud also weighed on consumer spending. Economists said Federal Reserve officials were likely to view both the anemic consumer spending and GDP growth as temporary when they meet next week. The Fed is not expected to raise interest rates.

“The good news is that the Fed in recent years has distanced itself from the GDP numbers,” said Lou Crandall, chief economist at Wrightson ICAP in Jersey City, New Jersey. “A weak first-quarter GDP print should not affect the policy debate.”

After contributing to GDP growth for two straight quarters, inventory investment was likely a drag in the first quarter. JPMorgan is forecasting inventories chopping off one percentage point from GDP growth. Trade was likely neutral after being a huge drag in the fourth quarter.

But some good news is expected. Business investment likely rose further, with spending on equipment seen accelerating thanks to rising gas and oil well drilling as oil prices continue their recovery from multi-year lows.

Investment in home building is also expected to have gained momentum in the first quarter.