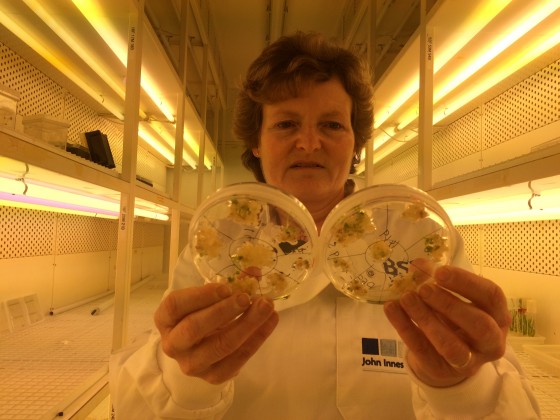 Professor Wendy Harwood poses for a photograph in a plant breeding incubator room with barley plants that have undergone gene editing at the John Innes Centre in Norwich, Britain, May 25, 2016. REUTERS/Stuart McDill

LONDON (Reuters) – Heat-tolerant Angus beef cattle designed for the tropics with white coats instead of black or red. A button mushroom that doesn’t turn brown. Pigs that don’t fall sick.

These are all ideas thrown up by gene editing, the new technology taking the biomedical world by storm, and one which also promises a revolution down on the farm.

It poses a thorny problem for European policymakers wary of new molecular manipulation in agriculture after a quarter century of conflict over genetically modified food.

In a research lab in Norwich, 100 miles northeast of London, Wendy Harwood is making exact DNA tweaks in barley plants to produce better-germinating grain, with higher yield and quality.

“We’ve never been able to go in and make such a precise change as we can now with gene editing,” said the John Innes Centre scientist. “This gives you exactly the change you want without anything you don’t want.”

Further to the south of England in Basingstoke, animal genetics firm Genus has tapped the same “CRISPR-Cas9” technique to develop the world’s first pigs resistant to a devastating and common viral disease, in a tie-up with U.S. researchers.

Agricultural scientists and companies worldwide are joining the gene editing race, including seeds giant Monsanto, now the target of a $62 billion takeover attempt by Germany’s Bayer.

Rival DuPont, which is merging with Dow Chemical, hopes to have CRISPR-edited corn and wheat on the market in five to 10 years.

Bright ideas from others include improved varieties of rice, soybeans and tomatoes, as well as hornless cattle and the heat-tolerant breed of Angus.

Using “molecular scissors” to cut DNA means scientists can edit genomes more precisely and rapidly than ever before, and agricultural products – which don’t need the same clinical trials as human drugs – could get to market relatively quickly.

Last month, a non-browning button mushroom became the first CRISPR-edited organism to get a green light from the U.S. government – and several crops developed with two older, less efficient editing tools have already been waved through.

But whether such products will ever arrive on European farms is another matter, since the European Commission has so far not made a decision on how they will be regulated, leaving the new science in limbo.

The EU executive had been due to decide by the end of 2015 whether to class gene-edited products as genetically modified organisms (GMOs), subjecting them to the same stringent restrictions that have curbed GMO use in Europe.

This deadline was missed, as was a second one of end-March 2016, and there is now no new timeline for a decision.

Both sides in the debate are worried.

Greenpeace wants the EU’s GMO law to be fully applied to “new breeding techniques” (NBT) like gene editing, because of potential environmental and health impacts, and it fears Brussels is dithering under pressure from Washington.

“We are concerned that we would get products that are risky but could arrive on the market without any risk assessment or labeling or detection methods,” said spokeswoman Franziska Achterberg.

She believes the EU has delayed regulation to pave the way for a transatlantic trade deal, citing a document in which a U.S. official warned that “different regulatory approaches between governments to NBT classification would lead to potentially significant trade disruptions”.

A Commission spokesman denied the delays had anything to do with the Transatlantic Trade and Investment Partnership trade pact talks, but could not say when the EU would make a ruling.

Biotechnology companies, meanwhile, argue their gene-edited products are “non-GMO”, since they do not contain foreign DNA from a different species.

“We fundamentally see gene editing as being very distinct from GMO,” said Genus Chief Executive Karim Bitar. “It’s a very precise cut and there is no movement of genes from one species to another. That’s a major attraction.”

The argument is complex.

Unlike traditional GMOs, in which a gene is added from another organism, gene-editing works like the find-and-replace function on a word processor. It finds a gene and then makes changes by amending or deleting it.

Proponents argue this makes it similar to conventional selective breeding, which is freely allowed in the EU, since such mutations within the same species can – and do – also occur naturally.

Rene Smulders, a plant breeder at Wageningen University in the Netherlands, says the current uncertainty is affecting research. His group had a grant application turned down last year because of concerns about the legal situation.

He wants Europe to follow the lead of Canada, which decides on new products based on their traits, not how those traits were produced. “Europe’s process-based legislation creates problems and is not suitable for the future,” Smulders said.

Cellectis CEO Andre Choulika, whose Calyxt unit has used older forms of gene editing to improve potatoes, wheat and soybeans, thinks the odds are 50:50 that gene-editing will end up being classified as GMO in Europe.

“If Europe does that, I think they will probably send themselves into the stone age of agricultural biotechnology,” he said.