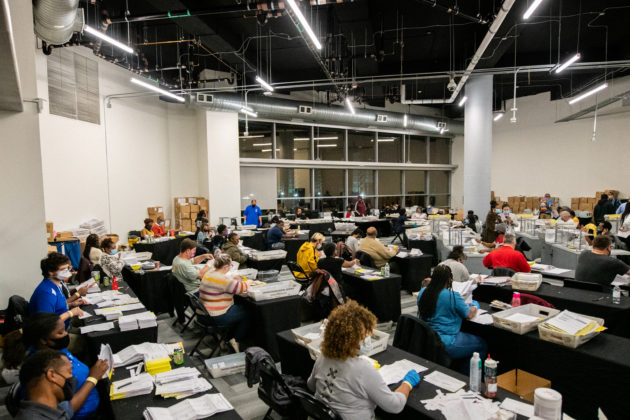 By Jason Lange and Julia Harte

WASHINGTON (Reuters) – Georgia will re-count all paper ballots cast in the Nov. 3 presidential election by hand, the state’s top election official said on Wednesday, a mammoth task that must be completed by Nov. 20.

Democrat Joe Biden secured more than the 270 Electoral College votes needed to gain the presidency on Saturday by winning Pennsylvania after four tense days of counting, delayed by a surge in mail-in ballots due to the coronavirus pandemic. Adding Georgia would only add to Biden’s margin of victory.

Republican President Donald Trump has refused to concede defeat and has said – without citing evidence – that the voting was marred by fraud.

The vote count in Georgia showed Biden ahead of Trump by just 14,101 votes out of some 5 million across the state. With the margin so small, a recount is needed, Georgia Secretary of State Brad Raffensperger said at a news conference.

“You actually have to do a full hand-by-hand recount of all because the margin is so close,” Raffensperger said. “We want to start this before the week is up.”

“People will be working lots of overtime over the next coming weeks,” he said.

Officials will work in pairs, sorting stacks of ballots into piles and counting them under the watch of observers from both political parties, Raffensperger said. The piles will include ballots cast in person and by mail, he said.

“That’s how it’s going to be all the way through, and you’re going to tally it all up. It’s a big process,” he said.

The scale of the endeavor is such that if counting takes place round-the-clock, officials will have to count more than 23,000 ballots an hour in the nine days before the deadline for the results to be certified.

A study by the non-partisan group Fair Vote found that out of 31 statewide recounts between 2000 and 2019, the outcome changed in only three of them. More often, the winner won by a tiny bit more. On average, they shifted the outcome by 0.024%, Fair Vote found – a much smaller margin than Trump would need. Biden currently leads Trump in Georgia by 49.5% to 49.2%.

Georgia’s two U.S. senators, David Perdue and Kelly Loeffler, both Republicans, on Monday called on Raffensperger, who is also a Republican, to resign over his management of the election. They presented no evidence of fraud, however.