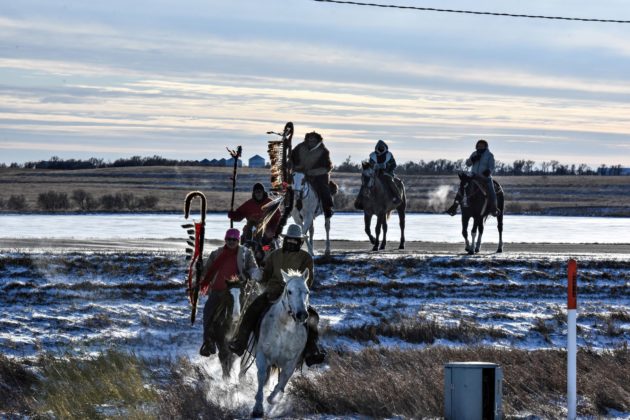 EAGLE BUTTE, S.D. (Reuters) – For the last 50 years, Bradley Upton has prayed for forgiveness as he has carried the burden of one of the most horrific events in U.S. history against Native Americans, one that was perpetrated by James Forsyth, his great-great-grandfather.

Forsyth commanded the 7th Cavalry during the Wounded Knee Massacre on Dec. 29, 1890, when U.S. troops killed more than 250 unarmed Oglala Lakota men, women and children, a piece of family history that has haunted the Colorado man since he was a teenager.

This week Upton, 67, finally got an opportunity to express his contrition and formally apologize for the atrocities carried out by Forsyth to the direct descendants of the victims at their home on the Cheyenne River Reservation in South Dakota.

“The response has been unbelievable … very positive and very touching,” Upton said as he wept during a phone interview with Reuters. “Love is divine and forgiveness is divine.”

The Lakota people “are extraordinary people. They are so wise and beautiful,” added the professional musician, who made the nine-hour trip from his home to the reservation.

During an event on Wednesday on the reservation, Emanuel Red Bear, a teacher and spiritual advisor, told descendants that they deserve Upton’s apology.

“Only one man had a conscience enough to come here to ask for forgiveness for what his great grandpa did,” he said. “There needs to be more.”

Upton’s journey to forgiveness began when his great uncle sent him photographs of the carnage when he was 16 years old.

“I knew immediately that it was wrong,” he said. “I felt a deep sadness and shame.”

“I prayed for the next 50 years for forgiveness and healing for all of the people involved, but particularly because my ancestors caused this massacre, I felt incredible heaviness,” he said.

Upton believes that the impact of the massacre can be seen throughout his family tree, which has been plagued by alcoholism, abuse and betrayal.

A year ago, a neighbor’s friend got Upton in contact with Basil Brave Heart, a Lakota elder. Brave Heart has worked on similar healing ceremonies and assisted Upton over the following year.

Deeply profound similarities exist between Buddhism and the beliefs of the Lakota people, who pray for “all my relations,” Upton said.

(Reporting by Brendan O’Brien in Chicago; Editing by Sandra Maler)