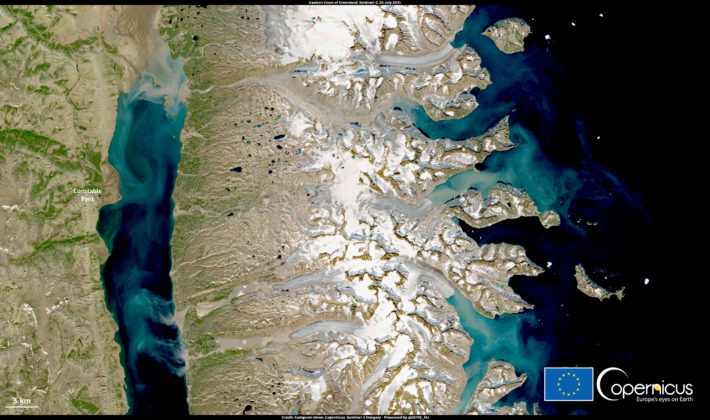 FILE PHOTO: This image, acquired by one of the Copernicus Sentinel-2 satellites, shows the very significant discharge of sediment into the Arctic Ocean by glaciers melting around Constable Pynt as a result of unusually high temperatures, Greenland July 28, 2021. Picture taken July 28, 2021. European Union, Copernicus Sentinel-2 imagery - Processed by @DEFIS_EU/Handout via REUTERS

BRUSSELS (Reuters) – With climate change fueling high temperatures across the Arctic, Greenland lost a massive amount of ice on Wednesday with enough melting to cover the U.S. state of Florida in 2 inches (5.1 cm) of water, scientists said.

It was the third-biggest ice loss for Greenland in a single day since 1950. The other two records, also within the last decade, happened in 2012 and 2019.

The rapid melt followed warm air being trapped over the Arctic island by a change in atmospheric circulation patterns, scientists said, noting that there could be more ice lost.

On Wednesday alone, some 22 gigatonnes of ice melted – with 12 gigatonnes flowing to the ocean and 10 gigatonnes absorbed by the snowpack where it can refreeze, said Xavier Fettweis, a climate scientist at the University of Liege in Belgium.

Polar Portal, a group of Danish Arctic research institutions, described it in a tweet as a “massive melting event.” While that volume was less than the record single-day ice melt in 2019, this week’s event covered a larger area, the group said.

Such events can create feedback loops that drive further warming and melting in Greenland, said Marco Tedesco, a climate scientist at Columbia University. As snow melts, it exposes darker ice or ground beneath, which absorbs more sunlight rather than reflecting it back out of the atmosphere.

“It really positions Greenland to be more vulnerable to the rest of the melting season,” said Tedesco, research professor at Columbia University’s Lamont-Doherty Earth Observatory.

Scientists have estimated that melting from Greenland’s ice sheet – the second-biggest on Earth after Antarctica’s – has caused around 25% of global sea level rise seen over the last few decades.

Tedesco and other scientists have warned that models used to project future ice loss do not capture the impact of changing atmospheric circulation patterns – meaning they may be underestimating the future melting of Greenland, which is located between the Arctic and Atlantic oceans.

Meanwhile, the Arctic is warming faster than the rest of the planet, due to factors including vanishing ice in the Arctic Ocean, which exposes darker water that absorbs solar radiation.

On Wednesday, air temperatures over Greenland were “worrisome,” the EU said, with temperatures in Constable Pynt on the east of the island hitting 23.2 C (73.8 Fahrenheit).

(Reporting by Kate Abnett in Brussels; Editing by Katy Daigle and Matthew Lewis)