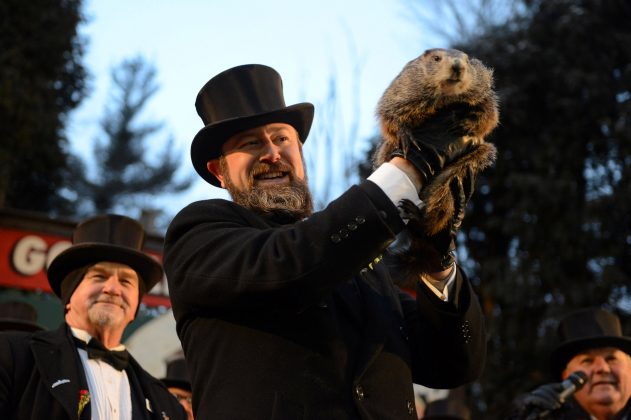 (Reuters) – Punxsutawney Phil, the weather-forecasting groundhog, emerged from his burrow in Pennsylvania on Friday, saw his shadow and predicted six more weeks of winter, despite his rival Staten Island Chuck in New York predicting an early spring.

Phil’s prognostication, which was delivered at about 7:20 am EST, was met with a mix of cheers and groans from thousands of revelers on Friday who gathered in the town of Punxsutawney about 80 miles (120 km) northeast of Pittsburgh.

Even though they have endured record-breaking freezing temperatures and an unusually powerful winter storm known as a “bomb cyclone,” North Americans should expect winter to stretch on, according to the furry Pennsylvania critter.

But another celebrated groundhog, Chuck in the New York City borough of Staten Island, did not see his shadow on Friday and instead predicted an early spring. Chuck is known for biting then-Mayor Michael Bloomberg during the ceremony in 2009.

According to legend, if the groundhog emerges from his dwelling and sees his shadow, six more weeks of winter should be expected. But if there is no shadow, spring will make an early arrival.

Groundhogs, portly animals belonging to the squirrel family, have been offering weather predictions in Punxsutawney, which has a population of about 6,000 people, since 1887.

The town’s annual Groundhog Day event, made more popular by the 1993 comedy film “Groundhog Day” starring Bill Murray, draws people from as far away as Australia and Russia. This year was the 132nd ceremony.

Canada has its own share of weather-forecasting mascots, including Wiarton Willie, an albino groundhog who is also due to make his spring prediction on Friday in southern Ontario.