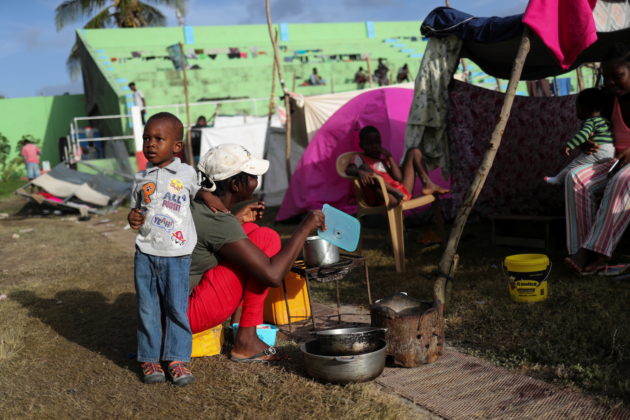 An evacuated woman prepares breakfast next to her son, in the stadium used as shelter after Saturday's 7.2 magnitude quake, in Les Cayes, August 18, 2021. REUTERS/Henry Romero

LES CAYES, Haiti (Reuters) – Haitians left homeless by a devastating earthquake that killed about 2,000 people voiced anger over a lack of government aid as they spent a fourth night in the open on Wednesday, many without clean water and food.

Prime Minister Ariel Henry, who flew to visit the worst-affected town of Les Cayes in southwest Haiti soon after Saturday’s quake of magnitude 7.2, had praised the dignity shown by survivors and promised a rapid escalation of aid.

But by late Tuesday, as storm clouds threatened a second night of heavy rain, residents of a mushrooming tent city in Les Cayes said help was scant.

“No one from the government has come here. Nothing has been done,” said Roosevelt Milford, a pastor who had visited radio and television stations in the area, pleading for airtime.

“We need help,” Milford said in a simple message delivered over the airwaves on behalf of the hundreds camping out in soggy fields since the quake destroyed their homes.

Nearby, displaced residents used machetes to shave down the edges of wooden poles to be staked into the ground to support makeshift tents.

Tropical Storm Grace, which ploughed across southern Haiti the previous night, had swept away many shelters and inundated the field, adding to the misery.

“We have the will to do everything but we don’t have the money or resources,” Milford said. “And we need to prepare for the rain coming tonight.”

He and others complained that they lacked even the most basic types of aid, such as food, clean drinking water, and shelter from the rain.

In a country with high levels of violent crime, residents set up their own security teams to keep watch at night, paying particular attention to the safety of women and girls, he added.

Security concerns about the gang-controlled areas on the route from the capital Port-au-Prince, as well as quake damage to some roads, have made access to some of the worst-affected zones difficult for aid and rescue teams.

The U.N. Office for the Coordination of Humanitarian Affairs said on Tuesday that successful negotiations with armed groups had permitted a humanitarian convoy to reach Les Cayes. Media said a truce had been agreed with the gangs.

Jerry Chandler, the head of Haiti’s Civil Protection Agency, which handles emergency response, said the government was sending aid to affected areas by land. In the first days after the quake, many medics and aid workers had rushed in by plane.

However, flash flooding and landslides in the wake of Tropical Storm Grace, which swept past Jamaica by Tuesday afternoon, worsened the difficulties of reaching remote communities.

Haiti, the poorest country in the Americas, is still recovering from a quake 11 years ago that killed more than 200,000. The latest calamity comes just over a month after the July 7 assassination of President Jovenel Moise plunged the country into political turmoil.

Authorities said on Tuesday that the earthquake had killed at least 1,941 people, but with rescuers still pulling bodies from the rubble the tally looks set to rise.

In a rare piece of good news, authorities said 16 people were pulled from the wreckage on Tuesday, though as time passes, hopes for survivors dim.

Quake damage has hampered the work of several major hospitals. Doctors in makeshift tents have battled to save the injured, from young children to the elderly.

The United Nations said it had allocated $8 million in emergency relief funds.

Water surged into the modest homes after a fast-moving river that edges the neighborhood burst its banks during the quake.

There, too, more than a dozen residents told Reuters that they had not seen any government representatives since the earthquake.

“We are crying out for help,” said one of them, Claudel Ledan. “All our houses collapsed and we need help from the government urgently.”