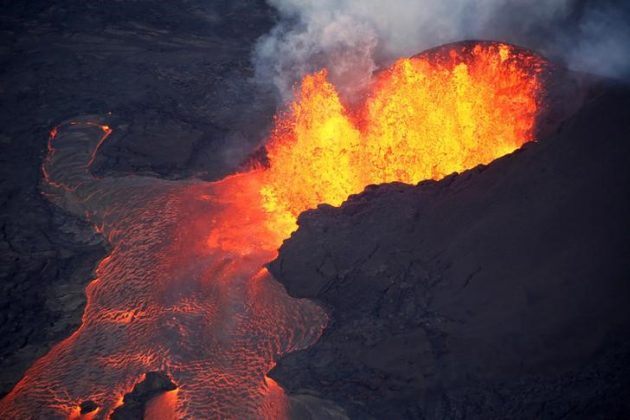 (Reuters) – The destructive lava eruption at the foot of Kilauea Volcano on the Big Island of Hawaii has slowed to a virtual halt in recent days for the first time in over three months, geologists said on Monday, although it was too soon to tell what might happen next.

The lone volcanic fissure that was still active last week has dwindled from a fountain of molten rock to a bubbling pond of lava no longer spilling out of the blackened cone surrounding it, said Tina Neal, chief scientist at the U.S. Geological Survey’s Hawaiian Volcano Observatory.

Levels of sulfur dioxide gas vented from the fissure, located on the lower east flank of Kilauea, about 25 miles (40 km) from its summit crater, have also dropped dramatically, she said.

The subdued activity there coincided with another major collapse in the outer wall of the summit crater last Thursday, followed by a final flurry of earthquakes before the peak of the volcano grew still.

“The system appears to have almost shut down completely over the course of a couple of days,” Neal told reporters on a conference call. She said it was “all consistent with something turning off the spigot to the surface.”

At this point, the volcanic reservoir at the bottom of the summit crater appeared “significantly drained” of magma – the term for molten rock before it erupts – that was feeding the lava vents downslope at the surface.

At the height of Kilauea’s current eruption, which began on May 3, a total of two dozen fissures had opened in the ground at the foot of the volcano, in an area scientists call the lower east rift zone. But only one vent, dubbed Fissure 8, was still active last week.

It was a river of lava from Fissure 8 that had crept eastward to the ocean, engulfing two seaside housing developments before pouring into the Pacific. Hundreds more dwellings have been swallowed closer to the eruption site. 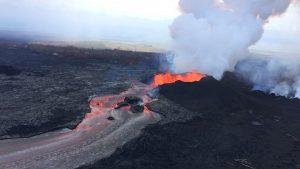 FILE PHOTO: Lava fragments falling from lava fountains at fissure 8 are building a cinder-and-spatter cone around the erupting vent, with the bulk of the fragments falling on the downwind side of the cone as it continues to feed a channelized lava flow that reaches the ocean at Kapoho during ongoing eruptions of the Kilauea Volcano in Hawaii, U.S. June 11, 2018. USGS/Handout via REUTERS

The property losses marked the most destructive eruption event of Kilauea or any other volcano in Hawaii’s recorded history.

Neal said it remains to be seen whether the reduced flow at Fissure 8 will turn out to be a brief pause or an extended lull, or whether other vents will reactivate. A similar 88-day eruption in the lower east rift zone in 1955 was punctuated by one pause of five days and one lasting 16 days, Neal said.

Neal said scientists would be surprised if the summit crater produced any new major eruptions in the near future.

The current shift in volcanic activity happened as Hurricane Hector churned across the Pacific toward Hawaii, with forecasters predicting it would skirt past the southern coast of the Big Island on Wednesday.

Neal said the storm would have no effect on the volcano, except for the possibility of large steam clouds producing “white-out” conditions in areas where heavy rain falls on top of molten lava that has yet to thoroughly cool.