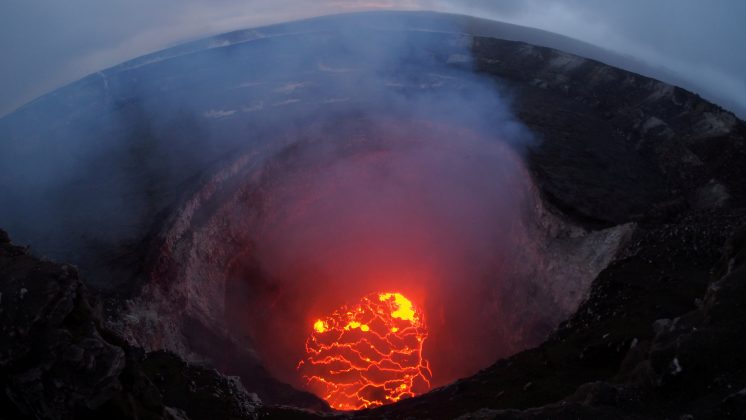 Kilauea volcano's summit lava lake shows a significant drop of roughly 220 metres below the crater rim in this wide angle camera view showing the entire north portion of the Overlook crater in Hawaii, U.S. May 6, 2018. Picture taken on May 6, 2018. USGS/Handout via REUTERS

PAHOA, Hawaii (Reuters) – Lava spewing in fountains up to 300 feet high from an erupting Hawaiian volcano has destroyed 35 homes and other buildings, officials said on Monday, warning residents allowed brief visits to their properties to be prepared to flee at a moment’s notice. 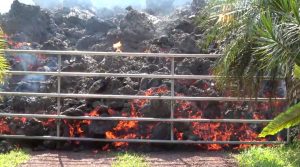 Lava advances towards a metal barrier in Puna, Hawaii, U.S., May 6, 2018 in this still image obtained from social media video. WXCHASING via REUTERS

Many of the 1,700 people under orders to evacuate from the Leilani Estates neighborhood on the eastern side of the Big Island were permitted to return home during daylight hours on Sunday and Monday, during a lull in seismic activity from Kilauea.

“Be prepared to evacuate at a moment’s notice,” the Hawaii County Civil Defense Agency said in an alert on its website. Residents of a second area, Lanipuna Gardens, were barred from returning home on Monday due to deadly volcanic gases.

Leilani Estates, some 12 miles from the volcano, was evacuated due to the risk of sulfur dioxide gas, which can be life threatening at high levels.

“Please, the residents of Leilani need our help. This is not the time for sightseeing. You can help tremendously by staying out of the area,” the agency said.

Kilauea, which began exploding on Thursday with fountains and rivers of lava flowing into neighborhoods, has opened 10 volcanic vents since then, officials said. Lava was not flowing from any of the vents on Monday.

So far, no deaths or major injuries have been reported, but the civil defense agency said at least 35 structures had been destroyed, many of them homes. 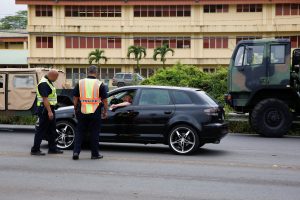 Residents of the Leilani Estates subdivision pass a checkpoint while driving to their homes to pick up belongings after being evacuated due to eruptions of the Kilauea Volcano on Monday in Pahoa, Hawaii, U.S., May 7, 2018. REUTERS/Terray Sylvester

The southeast corner of the island was rocked by a powerful magnitude 6.9 earthquake on the volcano’s south flank on Friday, the strongest tremor since 1975, and more earthquakes and eruptions have been forecast, perhaps for months to come.

Kilauea, one of the world’s most active volcanoes and one of five on the island, has been in constant eruption for 35 years. It predominantly blows off basaltic lava in effusive eruptions that flow into the ocean but occasionally experiences more explosive events.

“It’s been a bit of a chaotic week, a very stressful situation. It’s one of those hopeless, helpless outlooks. It’s hard to explain but the lava is right behind my house and it’s pretty surreal,” Leilani Estates homeowner Jared McManus told Reuters.

The Hawaii Star-Advertiser newspaper reported that a Hawaii-based utility, Puna Geothermal Venture, had 60,000 gallons (227,124 liters) of flammable pentane gas stored in the area that could not be removed until containers were delivered.

Some area residents returned for pets, medications and to check property on Sunday and Monday. Jeremy Wilson found his home surrounded by fissures hundreds of feet long.

“My house is right in the middle,” said Wilson, a 36-year-old social worker who turned back when he saw steam coming from cracks in the road.

The semi-rural wooded area had become a magnet for newcomers to the Big Island of Hawaii, home to about 200,000 people, who were prepared to risk living near an active volcano for more affordable real estate.

Jessica Gauthier, 47, said she and other local real estate agents had seen vacation renters cancel their reservations, though the volcanic activity is far from tourist centers.

“There’s no way to know that if you’re sitting in your living room in Ohio and watching the national news,” she said.

Hawaii’s 4,028-square-mile Big Island accounts for less than a fifth of the state’s tourism. State data show that in the first three months of 2018, 16 percent of the $4.81 billion visitors spent in Hawaii came from the Big Island, less than half of the levels seen in Oahu and Maui.

Gauthier predicted tourism would pick back up as a new kind of visitor began to appear.

“Within a month we’ll start getting lava tourists,” she said.