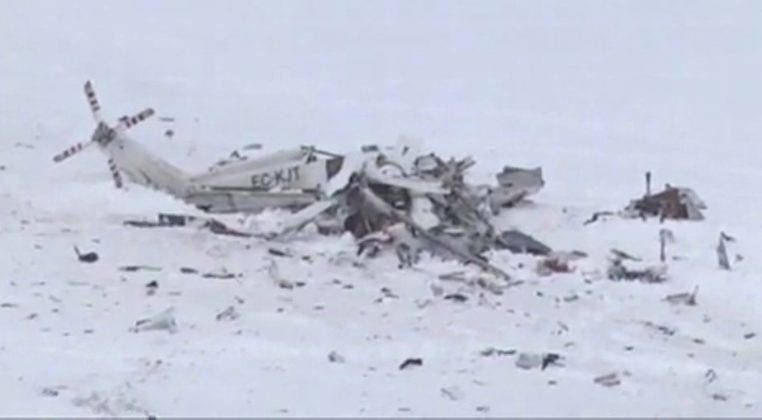 A medical emergency helicopter is seen after crashing in a mountainous area near Campofelice, central Italy January 24, 2017. èlive video news/Handout via REUTERS

FARINDOLA, Italy (Reuters) – A helicopter ambulance crashed in the Italian mountains on Tuesday killing all six on board, further stretching emergency services workers who found victims but no more survivors after an avalanche buried a nearby hotel.

The discovery of the bodies of two women in the afternoon as rescuers searched through the snow and rubble brought the death toll from last Wednesday’s destruction of the Hotel Rigopiano to 17 as the first funerals of the victims were held.

The unrelated crash of the helicopter on the other side of the Gran Sasso range about 100 km (60 miles) away in the Abruzzo region put the emergency services under further strain.

Rescue workers had to climb up part of a mountain to reach the wrecked helicopter, which had been heading to a hospital in the regional capital of L’Aquila with an injured skier aboard when it plunged into a mountainside.

The cause of the crash, which happened in the fog, was not immediately known.

The new disaster hit the region as the first funerals were held for the victims of the avalanche disaster.

Family and friends of hotel worker Alessandro Giancaterino filed into a church in nearby Farindola behind the 42-year-old’s coffin, which was draped with an Inter Milan soccer club flag.

“He was a perfect person. Kind, gentle. He loved his job at the hotel,” one friend said outside the church.

His brother, former Farindola mayor Massimiliano Giancaterino, did not speak to reporters. He told Italian state TV on Monday he had signed off on permission to add an extension to the hotel while in office.

“If I had known this would happen I would have cut off my right arm rather than sign the approval,” the former mayor said. “But hindsight doesn’t solve anything. You only ever think of doing what is best for the area, giving people opportunity.”

Some of the 11 survivors spent two days under ice and rubble. Twelve people are still missing since the wall of snow razed the four-storey building last Wednesday, hours after earthquakes shook Abruzzo and the neighboring regions.

Three puppies were found alive in the hotel’s crushed boiler room on Monday. The last time surviving people were brought out was on Saturday morning.

But officials vowed to carry on with the rescue effort.

“We will not stop until we are certain that no one else is left under there,” said civil protection official Luigi D’Angelo. “We are searching in the heart of the building.”

Prosecutors in nearby Pescara have opened an investigation into the hotel disaster. Pescara prosecutor Cristina Tedeschini said her office would probe the hotel’s structure, accessibility and communications surrounding the incident.

(Additional reporting by Antonio Denti in Penne and Steve Scherer in Rome; Writing by Isla Binnie; Editing by Philip Pullella and Alison Williams)