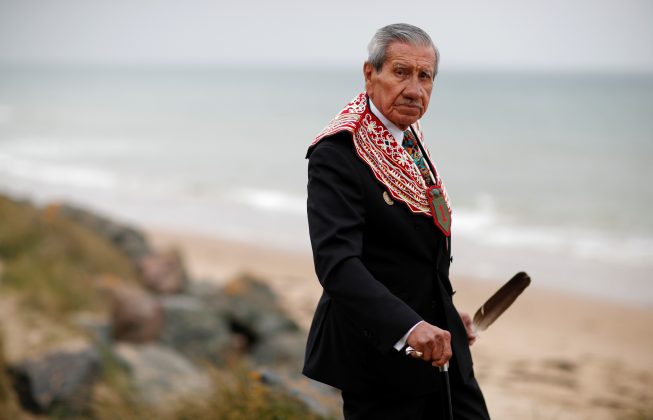 OMAHA BEACH, France (Reuters) – Seventy-five years ago, 19-year-old Charles Shay leapt off a U.S. landing boat and into chest-deep water just off the Normandy coast. As he came ashore in the first wave of D-Day infantrymen, he had just one objective.

“I wanted to survive, and that was the thought going through many minds: survival,” Shay said.

On June 6, 1944, he was in France not to kill but to rescue. As a medical technician, he was to treat the wounded as the world’s largest ever seaborne invasion unfolded.

One of 175 Native Americans who landed in Normandy that day, he ran across the beach dozens of times, dragging men out of the surf and patching up their wounds under heavy fire &mdash; actions for which he was awarded a Silver Star, three Bronze Stars, and France’s Legion d’Honneur.

All around him, Shay faced the earsplitting chaos of rattling machine guns, exploding mortars, disfigured bodies and far too many wounded to treat. Of the 160,000 troops who landed during D-Day, more than 10,000 were wounded or killed.

“I had to sit and think, I had to push all of this out of my mind,” Shay, who celebrates his 95th birthday next month, told Reuters. “I did not think about it anymore, and then I was able to operate and do the things that I was trained to do: treat the wounded and try to save lives.”

He grew up in the Indian Penobscot Nation in the U.S. northeast but now, drawn back to the place where he took part in history, he lives in Normandy.

As the invasion’s 75th anniversary approaches, the telling contribution made by Native Americans – many of them Comanche code talkers tasked with sending radio messages in their language’s impenetrable code – is only starting to be fully appreciated.

That is in large part down to Shay. 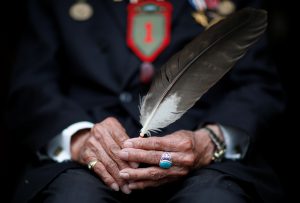 “After the war, long after, I wanted to speak for Native American veterans,” he said, standing on a bluff near the town of Saint-Laurent-sur-Mer, overlooking Omaha Beach. In his hand, he holds a feather of a beaded eagle and his chest is adorned with his unit’s insignia, a host of medals and a traditional Native collar.

Last year, his efforts bore fruit when a memorial was erected to the Native Americans who fought on Omaha Beach. In Native folklore, they are known as the boys from Turtle Island, so it features a large granite turtle.

Although he works to honor their sacrifice, Shay – a veteran of the U.S. 1st Infantry Division, 16th Infantry Regiment, Fox Company – emphasizes that remembrance encompasses all who serve.

“It’s not only Native Americans it’s all soldiers, from every nation, that participated in the invasion of Europe. We do not want to forget them.”

When Shay was a boy Native Americans faced systematic discrimination, having not been granted U.S. citizenship rights until the month of his birth. But his mother successfully fought to get him an education at a better, all-white school, going so far as to write to then President Franklin D. Roosevelt.

Shay and his three brothers all served their country in World War Two, and they all survived. Asked how he views the end of his days, he is unflinching.