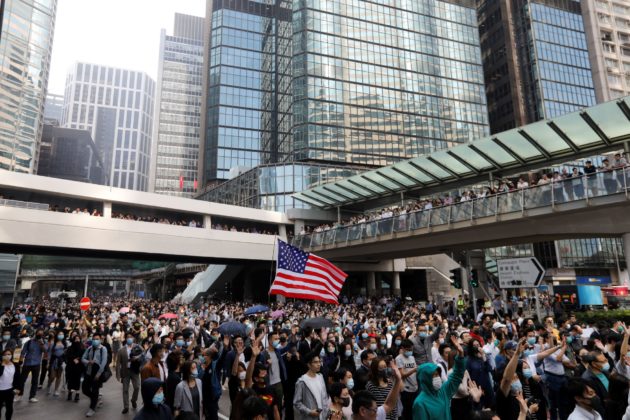 By Jessie Pang and Kate Lamb

HONG KONG (Reuters) – Hong Kong pro-democracy protesters partially unblocked a key highway on Friday and then blocked it again during the evening rush hour, exposing splits in a movement that has been largely leaderless in months of often violent unrest.

Activists closed the Tolo highway this week, clashing with police and throwing debris and petrol bombs on the road linking the largely rural New Territories with the Kowloon peninsula to the south.

They turned the Chinese University campus next door and several other universities into fortresses, stockpiled with petrol bombs and bows and arrows, amid some of the worst violence in the former British colony in decades.

But many protesters left the Chinese University after some allowed the partial reopening of the highway on Friday, taking others by surprise.

“I am disappointed about the decision to reopen the Tolo highway and it’s not our consensus,” one student who gave his name as Cheung, 18, told Reuters.

“I was asleep when they had closed-door meetings. I was worried and scared after I realized what had happened and most protesters had left. I was worried the police might storm in again because so few people are left. Some protesters from the outside have gone too far.”

Most protesters had left by late evening but the road remained closed.

The Cross-Harbour Tunnel, outside the barricaded Polytechnic University where protesters have practised firing bows and arrows and throwing petrol bombs in a half-empty swimming pool, remained shut.

Students and protesters have barricaded at least five campuses in the Chinese-ruled city. Police have kept their distance from the campuses for more than two days, saying both sides should cool off, but many observers are afraid of what will happen if and when they move in.

Activists also littered Nathan Road in the Kowloon district of Mong Kok, a frequent venue for protests, with bricks and set a street barricade on fire.

The week has seen a marked intensification of the violence.

A 70-year-old street cleaner died on Thursday after being hit on the head by one of several bricks police said had been thrown by “masked rioters”. On Monday, police blamed a “rioter” for dousing a man in petrol and setting him on fire. The victim is in critical condition.

On the same day, police shot a protester in the abdomen. He was in stable condition.

“We can no longer can say Hong Kong is a safe city,” Chief Secretary for Administration Matthew Cheung told a briefing.

Protesters are angry at perceived Chinese meddling in the city since it returned to Beijing rule in 1997 under a “one country, two systems” formula guaranteeing its colonial-era freedoms. Their demands include full democracy and an independent investigation into perceived police brutality.

China denies interfering and has blamed Western countries for stirring up trouble. Police say they are acting with restraint in the face of potentially deadly attacks.

China and Hong Kong both condemned an attack in London on Thursday by a “violent mob” on Hong Kong’s justice secretary, the first direct altercation between demonstrators and a government minister.

Secretary for Justice Teresa Cheng, who was in London to promote Hong Kong as a “dispute resolution and deal-making hub”, was targeted by a group of protesters who shouted “murderer” and “shameful”.

The British police said a woman had been taken to hospital with an injury to her arm and that they were investigating but no arrests had been made.

Hong Kong sank into recession for the first time in a decade in the third quarter, government data confirmed on Friday, with its economy shrinking by 3.2% from the previous quarter on a seasonally adjusted basis.

Organizers of the annual Clockenflap music and arts festival, due to take place from Nov. 22-24, said it had been canceled because of the unrest.

The PLA has stayed in the barracks since 1997 but China has warned that any attempt at independence will be crushed.