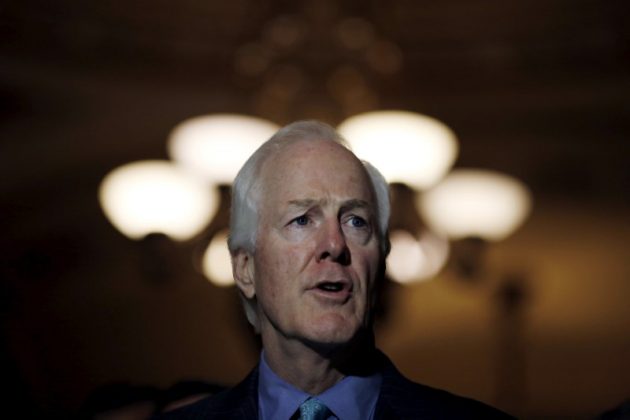 (Reuters) – U.S. Senator John Cornyn will no longer deliver the commencement address at Texas Southern University this weekend, the school said on Friday, after U.S. Education Secretary Betsy DeVos was booed at another historically black university.

More than 800 people signed a petition started by a Texas Southern University student who opposed the university’s invitation to the Republican senator to speak at Saturday’s graduation in Houston.

The petition said Cornyn’s backing of DeVos and Attorney General Jeff Sessions, among other things, showed that he supported “discriminatory policies and politicians.”

“We have the right to decide if we want to refuse to sit and listen to the words of a politician who chooses to use his political power in ways that continually harm marginalized and oppressed people,” the petition said.

The university, which will graduate more than 1,100 students on Saturday, said every effort had been made to ensure its ceremony was a celebration that would be remembered for the right reasons.

Cornyn has been invited to meet with Texas Southern University students in the future, the school said in a statement.

Libby Hambleton, a spokeswoman for Cornyn, said in an email that the senator was honored to have been invited to speak, but that he “respects the administration’s decision and looks forward to continuing to engage with the university in the future.”

It was not immediately clear who would replace Cornyn at the ceremony.

Texas Southern University’s action came after graduates at Bethune-Cookman University in Daytona Beach, Florida, booed, jeered and turned their backs on DeVos in protest on Wednesday as the education secretary gave a commencement speech.

Bethune-Cookman students, alumni and political activists, angered by comments DeVos has made about historically black colleges and universities, gathered tens of thousands of signatures on petitions seeking to have the invitation to DeVos rescinded.

DeVos, who is a proponent of school choice, said in February that such schools were “real pioneers” when it came to choice, without acknowledging racism as the main factor that led to the creation of such institutions.

She subsequently noted that historically black colleges were created because other institutions were not open to African-Americans.