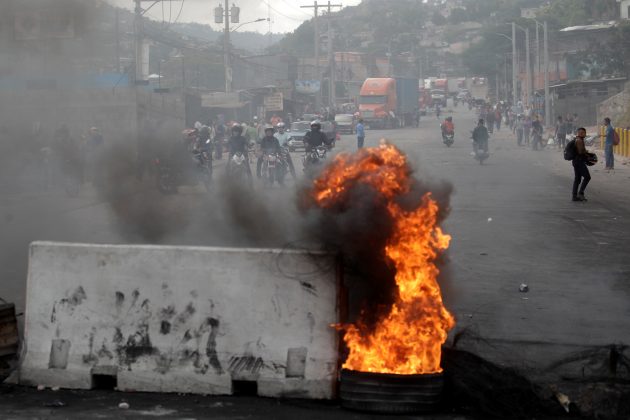 A burning barricade settled to block road by supporters of Salvador Nasralla, presidential candidate for the Opposition Alliance Against the Dictatorship, is pictured during a protest caused by the delayed vote count for the presidential election in Tegucigalpa, Honduras December 1, 2017. REUTERS/Jorge Cabrera

TEGUCIGALPA (Reuters) – Honduras enforced a curfew on Saturday while still mired in chaos over a contested presidential election that has triggered looting and protests in which at least one person has died.

The government’s move on Friday evening to enact the nationwide curfew for 10 days and expand powers for the army and police was criticized by opposition leaders as a move to stifle protests over a presidential vote count that stalled for a fifth day without leaving a clear winner.

President Juan Orlando Hernandez has clawed back a thin lead over his challenger, TV-host Salvador Nasralla, but thousands of disputed votes could still swing the outcome.

Since last Sunday’s election, at least one protester has died, over 20 people were injured and more than 100 others were arrested for looting after opposition leaders accused the government of trying to steal the election by manipulating the vote count.

“The suspension of constitutional guarantees was approved so that the armed forces and the national police can contain this wave of violence that has engulfed the country,” said Ebal Diaz, member of the council of ministers, on Friday.

Under the decree, all local authorities must submit to the authority of the army and national police, which are authorized to break up blockades of roads, bridges and public buildings.

International concern has grown about the electoral crisis in the poor Central American country, which struggles with violent drug gangs and one of the world’s highest murder rates.

In the widely criticized vote count, Nasralla’s early lead on Monday was later reversed in favor of President Hernandez, leading Nasralla to call for protests.

The count stalled on Friday evening when the electoral tribunal said it would hand-count the remaining ballot boxes that had irregularities, comprising nearly 6 percent of the total vote.

The electoral tribunal said it was set to resume the vote count at 9 a.m. local time on Saturday, but Nasralla’s center-left alliance has refused to recognize the tribunal’s authority unless it recounts three regions with alleged vote irregularities.

The 64-year-old Nasralla is one of Honduras’ best-known faces and backed by former President Manuel Zelaya, a leftist ousted in a coup in 2009. He said on Friday that government infiltrators had started the looting and violence to justify a military curfew.

Hernandez, speaking to reporters after the curfew went into effect, said the government put the measure in place at the request of concerned citizen groups.

“As far as the curfew, I want to clarify that various sectors requested it…in order to guarantee the safety of the people,” he said.