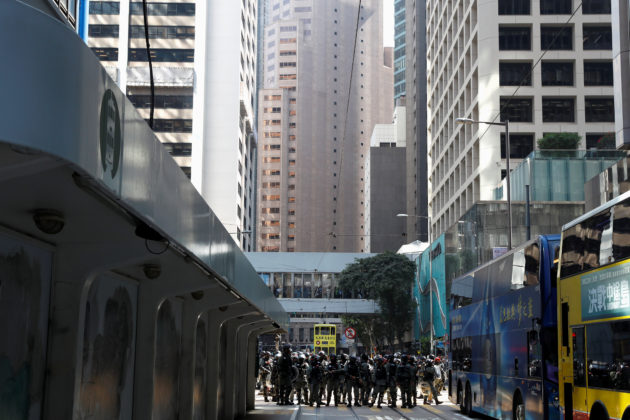 By Sumeet Chatterjee and Clare Jim

HONG KONG (Reuters) – Hong Kong police moves to freeze the accounts of several people linked to pro-democracy protests is prompting some residents to shift part of their savings overseas, bankers and lawyers said.

Banks were asked by police to freeze the accounts of veteran activist Ted Hui and his family last week, and on Monday a local church’s account was blocked, all on suspicion of money laundering.

The cases involved bank accounts held at HSBC, among others. Asked about the church’s account, HSBC said on Tuesday it did not comment on specific accounts. While limited, the police moves have triggered concerns that asset freezing could be used against Beijing opponents in Hong Kong to crack down on dissent, said the bankers and lawyers, who declined to be named because of the sensitivity of the matter.

Jimmy Chung, who works in retail planning, opened a bank account in Switzerland in June, around the time the government passed a national security in response to last year’s violent pro-democracy protests in Hong Kong.

The 40-year-old, who has no ties to political activists in Hong Kong, said he transferred thousands of dollars of his savings by July and is now considering moving more offshore.

“I never thought things would be evolving this fast, so I have to make more contingency plans,” said Chung, referring to the recent bank account freezes.

Chung’s reaction mirrors that of others worried by events in the financial hub, which attracts significant investment.

“The people who were sitting on the fence are starting to take action now,” one of them said. “They are worried that this (account freezing) could become more widespread and they have a lot to lose if all their savings are in Hong Kong.”

Another banker with a European wealth manager said some clients, who had no involvement in the protests, were converting assets denominated in local currency into U.S. dollars as they prepared to move them offshore.

Hong Kong has not seen large capital outflows despite the protests, instead benefiting from inflows tied to a large number of public offering of shares.

Responding to criticism that freezing the account of ex-lawmaker Hui, who fled to Britain after criminal charges related to the protests, would hurt Hong Kong’s image, its leader Carrie Lam said the financial and monetary systems remained robust.

The Hong Kong Monetary Authority said that the freezing of funds or property related to criminal investigations was by law enforcement agencies and banks were expected to cooperate.

“The main concern here is if this (power) is being used more loosely,” a lawyer who advises wealthy individuals said.

“People are now asking what would be the best alternative for them to safely park their assets.”

The Good Neighbor North District Church, whose volunteers gave “humanitarian aid” to protesters, said on Facebook that its HSBC account was frozen as an “act of political retaliation”.

The Hong Kong police said they asked a bank on Monday to freeze five accounts, involving a total of $3.2 million, related to suspicion of fraud and money laundering.

The police did not name the bank involved.