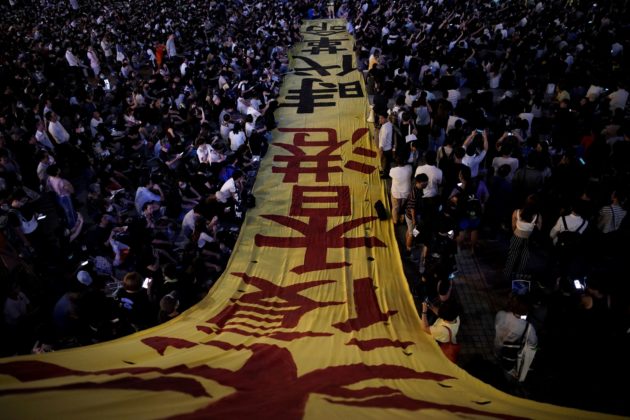 By Jessie Pang and Felix Tam

HONG KONG (Reuters) – Thousands of Hong Kong protesters rallied at the harbor side on Friday, chanting slogans accusing the police of brutality and setting the stage for a weekend of demonstrations leading up to the 70th anniversary of the People’s Republic of China.

The downtown rally was one of a series of protests that have united activists denouncing Chinese rule, calling for democracy and even for independence from Beijing, often resulting in violent clashes with police in the former British colony.

Activists have targeted police over more than three months with petrol bombs, rocks and laser shone in their eyes, furious at social media footage of random beatings, especially one night against protesters cowering on the floor of a subway train.

The protesters gathered at a park on reclaimed land in front of central government offices on Friday night calling for an investigation into the remote San Uk Ling camp near the Chinese border where they say detained protesters were abused, a claim police deny.

Police said the camp was no longer being used to hold protesters.

“Its setting and facilities are all in line with police policies and regulations,” they said in a statement. “We will stop using San Uk Ling Holding Centre for holding arrested people in this operation. The reason is to avoid any further public speculation and unnecessary remarks accusing the police.”

One officer told reporters last week that some officers had overstepped the line when dealing with protesters.

“You are talking about a prolonged situation, chaos, violent encounters,” he said. “We have established procedures to deal with allegations of abuse of force. Every day, with every chance we have, we remind our officers not to succumb to emotions.

“We’ve gone through multiple situations where lethal force would have been justified, but our officers chose not to use it.”

Hong Kong leader Carrie Lam, in the first “open dialogue” session with the people on Thursday, said she would not accede to protesters’ demands for an independent inquiry into police action. She did not explain why.

This weekend, the Asian financial hub marks the fifth anniversary of the start of the “Umbrella” protests, a series of student-led pro-democracy demonstrations in 2014 that failed to wrest concessions from Beijing.

One of the most prominent leaders of those protests, the bespectacled Joshua Wong, then just 17, is expected to announce on Saturday that he will run for local district council elections in November, his supporters said.

He is on bail after being charged with inciting and participating in an unauthorized assembly outside police headquarters on June 21.

Thousands of people are expected to rally in the city center on Saturday evening. Protests are also expected on Sunday to mark Global Anti-Totalitarianism Day, with solidarity events planned in cities across the world, including Paris, Berlin, Taipei, New York, Kiev and London.

But the biggest protests are likely to be on Oct. 1, marking the anniversary of the proclamation of the People’s Republic of China in 1949, with protesters saying they plan to use the holiday to propel calls for greater democracy.

Activists plan a mass rally from Victoria Park in the bustling Causeway Bay district to Chater Garden near government headquarters.

Official festivities for National Day have been scaled back, with authorities keen to avoid embarrassing Beijing at a time when President Xi Jinping is seeking to project an image of national strength and unity.

Pro-Beijing rallies are also planned in the city, raising the prospect of clashes.

The protests were sparked in June by a bill, since withdrawn, that would have allowed the extradition of suspected criminals to mainland China but have since expanded into a broader pro-democracy movement.

Protesters are angry about what they see as creeping Chinese interference in Hong Kong, which returned to China in 1997 under a “one country, two systems” formula intended to guarantee freedoms that are not enjoyed on the mainland.

China denies meddling. It has accused foreign governments, including the United States and Britain, of inciting the unrest.