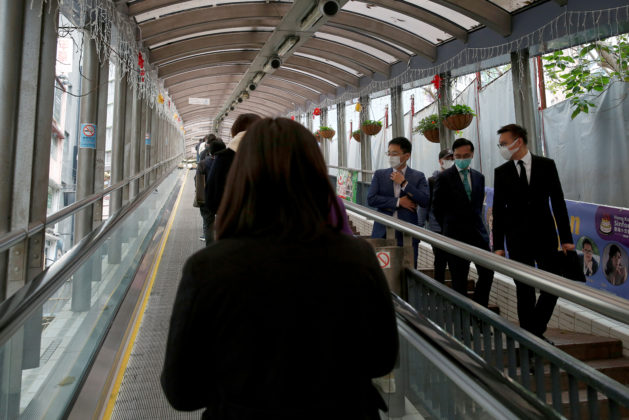 HONG KONG (Reuters) – Hundreds of demonstrators rallied for a second day in Hong Kong on Sunday to protest against plans to turn some buildings into coronavirus quarantine centers, reviving anti-government protests in the Chinese-ruled city.

The virus has opened a new front for protesters after months of demonstrations over the perceived erosion of freedoms had largely fizzled out over the past month, as people stayed at home amid fears of a community outbreak of the virus.

About 100 people braved rain in the New Territories district of Fo Tan, where authorities plan to use a newly built residential development that was subsidized by the government as a quarantine center. Riot police stood by.

A 38-year-old mother of two said she had waited eight years for her home in the Chun Yeung estate and was expecting to get her keys by the end of this month.

“There’s no consultation and we don’t know how long they’ll use Chun Yeung estate. That’s why we are so mad,” she the woman.

Father-of-two Koby, 36, also expressed frustration at not being told for how long the public housing might be used for quarantine.

“I’ve waited eight years. I have two children studying in kindergarten and have already transferred them to the school in Fo Tan,” he said.

Protesters gathered in other districts on Sunday.

With Hong Kong property prices among the most expensive in the world, owning a home is a distant dream for many, and frustration over housing has triggered protests in the past.

Many Hong Kong people, already angry about what they see as meddling by Beijing in the former British colony’s affairs – which it denies – have criticized the government’s handling of the virus scare, piling pressure on embattled city leader Carrie Lam.

On Friday, the government sought to appease families that have been allocated a flat in the Fo Tan estate by pledging a special subsidy.

Three weeks ago, protesters set alight the lobby of a newly built residential building in another district in the New Territories, that authorities had planned to use as a quarantine facility. The government dropped the plan.

Hong Kong has had 57 confirmed cases of the coronavirus. One person has died of it in the city.

Some Hong Kong people have called on the city government to seal the border with the mainland to block the virus but Lam has ruled that out.