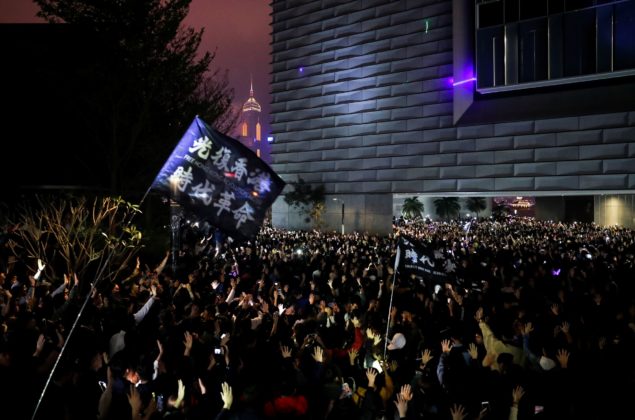 By Jessie PANG and Mari Saito

HONG KONG (Reuters) – Thousands of Hong Kong revelers welcomed in 2020 on neon-lit promenades along the picturesque Victoria Harbour, breaking into pro-democracy chants as the clocks struck midnight after more than half a year of often violent unrest.

Protesters briefly blocked Nathan Road, a key artery leading through Kowloon to the harbor, after forming human chains across the Chinese-ruled city and marching through shopping malls, urging people not to give up the fight for democracy in 2020.

The protesters fled when police came to clear the road of umbrellas, street furniture and debris and a three-meter-tall skeleton of a metal Christmas tree. Several arrests were made.

Authorities had canceled the popular new year fireworks for the first time in a decade, citing security concerns. A “Symphony of Lights” took place instead, involving projections on the city’s tallest skyscrapers after the countdown to midnight.

There were small-scale pyrotechnics on waterfront rooftops, but the grandiose fireworks launched from vessels in the center of the harbor, broadcast around the world every year, were absent.

The carnival atmosphere on the harbor was interrupted as parts of the crowd of thousands watching the show began chanting protest slogans, such as “Liberate Hong Kong! Revolution of our times” and “Five demands, not one less.”

The latter refers to the goals of the anti-government movement, which include universal suffrage and an independent inquiry into alleged police brutality.

The protesters are angry at what they see as creeping Beijing influence in the city which was guaranteed wide-ranging autonomy when it returned from British to Chinese rule in 1997. Beijing denies interference and blames the West for fomenting the unrest.

“We should not forget the people in jail who could not count down to the new year with us.”

On Nathan Road, protesters in a chain stretching for several kilometers raised lit-up smartphones as passing cars and buses honked in support and tourists in party hats and 2020-shaped glasses took pictures. Many protesters held up cards reading “Let’s keep fighting together in 2020.”

The chain later spilled over on to the road, and some protesters built barricades and hid behind umbrellas until police chased them away. A water cannon truck, flanked by an armored jeep, patrolled the road at midnight.

“This year there are no fireworks, but there will probably be tear gas somewhere,” said 25-year-old IT worker Sam. “For us it’s not really New Year’s Eve. We have to resist every day.”

Dozens of people had earlier laid flowers at the Prince Edward metro station, scene of some of the most violent clashes with the police this summer.

The protests began in June in response to a now-withdrawn bill that would have allowed extraditions to mainland China, where courts are controlled by the Communist Party, and have evolved into a broader pro-democracy movement.

The protest movement is supported by 59% of city residents polled in a survey conducted for Reuters by the Hong Kong Public Opinion Research Institute. More than a third of respondents said they had attended an anti-government demonstration.

“Let’s start 2020 with a new resolution, to restore order and harmony in society. So we can begin again, together,” Lam said.

“Without a harmonious and stable environment, how can there be a home where people can live and work happily?” he said. “We sincerely hope for the best for Hong Kong and Hong Kong compatriots.”

Police, who reject allegations of brutality and say they have shown restraint, have arrested nearly 6,500 people since the protests began escalating in what is the worst political crisis faced by the city in decades.

On Jan. 1, tens of thousands of people are expected to join a pro-democracy march, starting from a park downtown and ending in the heart of the central financial district.

“January 1, see you in Victoria Park,” people gathered on the waterfront chanted.