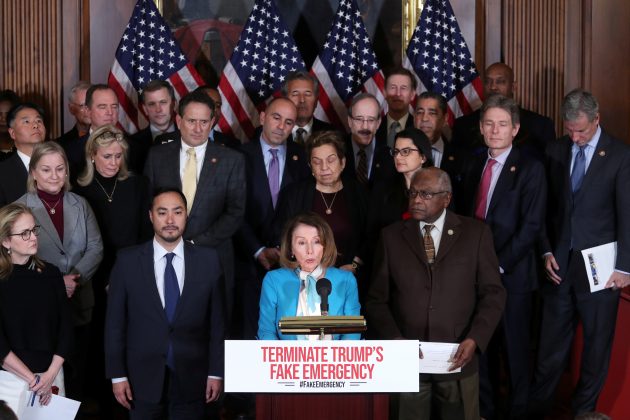 WASHINGTON (Reuters) – The U.S. House of Representatives was poised on Tuesday to vote for terminating President Donald Trump’s proclaimed national emergency at the U.S.-Mexico border, a first step toward what could be a stinging rejection of his proposed border wall.

If the Democratic-controlled House approves a resolution ending the president’s emergency, as expected, the measure would go to the Republican-controlled Senate where its chances of passage were slimmer, but seemed to be improving.

Trump has vowed to issue a veto, which would be the first of his presidency, against any resolution approved by both chambers targeting the emergency that he single-handedly declared on Feb. 15 as a way to fund his wall by circumventing Congress.

Overriding such a veto in Congress would require two-thirds majorities in both chambers, making it highly unlikely, said lawmakers.

“When you see the vote today, there will be nowhere near the votes to override a veto,” U.S. Representative Steve Scalise, the No. 2 House Republican, told reporters on Capitol Hill on Tuesday.

The battle in Congress is the latest chapter in a long-running war between Trump and Democrats over border security, immigration policy and the “great, great wall” that Trump has pledged to build since becoming a presidential candidate.

He originally promised that Mexico would pay for it, but after Mexico refused, he asked U.S. taxpayers to foot the bill for the project, which Democrats call unneeded and ineffective.

In his first two years in office, Trump’s Republicans controlled both chambers of Congress, which under the U.S. Constitution holds the national purse strings, but lawmakers failed to provide the funding Trump wanted for his border barrier.

When Congress, with the House now controlled by Democrats, refused in recent weeks to provide the money he wants, Trump declared an emergency and vowed to divert funds toward the wall from accounts already committed by Congress for other purposes.

That set up a test of the constitutional separation of powers between Congress and the presidency that will likely lead to a court challenge after lawmakers deal with the resolution.

A coalition of 16 U.S. states led by California has already sued Trump and top members of his administration in an attempt to block his emergency declaration.

Writing on Twitter on Monday, Trump, who says the wall is needed to stop illegal immigration and drugs, warned Republicans not to “fall into the Democrats ‘trap’ of Open Borders and Crime!”

Republican Representative Justin Amash is co-sponsoring the resolution in the House, along with more than 230 House Democrats, and Amash is urging his colleagues to support it.

“The same congressional Republicans who joined me in blasting Pres. Obama&rsquo;s executive overreach now cry out for a king to usurp legislative powers,” Amash wrote on Twitter.

“If your faithfulness to the Constitution depends on which party controls the White House, then you are not faithful to it,” he wrote over the weekend.

The White House was working to limit Republican support for the measure, especially in the Senate. Vice President Mike Pence was scheduled to attend a Senate Republican luncheon on Tuesday, where the resolution was expected to be a key topic.

Republican Senator Thom Tillis, in an opinion article published in the Washington Post, said he backed Trump on border security, but would vote for the resolution because he “cannot justify providing the executive with more ways to bypass Congress.”

At least two other Republican senators, Susan Collins and Lisa Murkowski, have said they will likely support the measure, too. For it to pass the Senate, at least one more Republican vote would be needed, assuming all Democrats and two independents back it.

Trump declared the emergency after Congress declined his request for $5.7 billion to help build the wall.

Congress this month appropriated $1.37 billion for building border barriers following a battle with Trump, which included a 35-day partial government shutdown – the longest in U.S. history – when agency funding lapsed on Dec. 22.