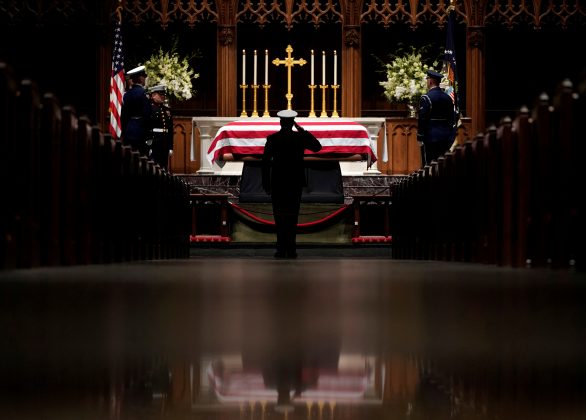 HOUSTON (Reuters) – Former U.S. President George H.W. Bush will be mourned on Thursday at the Houston church where he worshipped for many years, a final public farewell before his remains are taken to their resting place at his Texas presidential library.

Bush, the 41st U.S. president, died last week in Texas aged 94. His remains were flown to Texas on Wednesday evening after a formal state funeral at Washington’s National Cathedral.

The casket was accompanied by members of his family, and taken by motorcade to St. Martin’s Episcopal Church.

The church remained open through the night so mourners, who began lining up on Wednesday morning, could pay their final respects.

Country music star Reba McEntire was due to be among the musical performers at the service, which was scheduled to start at 10 a.m. CT (1600 GMT).

Following the funeral at St. Martin’s, where Bush and his late wife, Barbara Bush, were long-time worshippers, a train will carry his remains about 80 miles (130 km) northwest to College Station, Texas, where he will be laid to rest at his presidential library.

The train is a Union Pacific Corp locomotive, numbered 4141 and bearing the name “George Bush 41” on the side that has been in service since 2005.

Bush, who narrowly escaped death as a naval aviator who was shot down by Japanese forces over the Pacific Ocean in World War Two, will be buried with military honors, including a flyover by 21 aircraft from the U.S. Navy.

A patrician figure, Bush was voted out of office in part for failing to connect with ordinary Americans during an economic recession. He has also been criticized for supporting tough drug laws that led to the disproportionate incarceration of black people, as well as what activists call an insufficient response to the AIDS epidemic when he was in power during some of its deadliest years.

But many tributes in recent days have focused on the former Republican president as a man of integrity and kindness who represented an earlier era of civility in American politics. That image has been burnished in recent years by the divisiveness and anger in the United States that accompanied the rise of President Donald Trump.