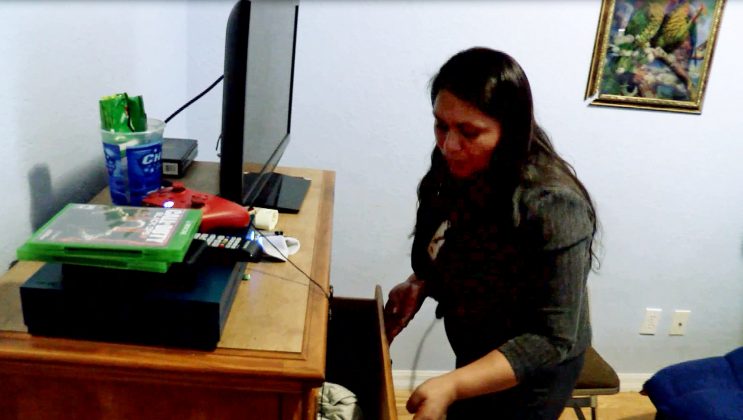 Catarina Miguel, aunt of Yaiser, who was separated from his mother at the U.S. Mexico border and is in detention, is interviewed in the room she has ready for him at her home West Palm Beach, Florida, U.S., in this still image from video, taken August 10, 2018. REUTERS TV/Zach Fagenson

By Kristina Cooke and Reade Levinson

SAN FRANCISCO/WEST PALM BEACH (Reuters) – For two months in detention after being separated from her 14-year old son by U.S. border officials, Catalina Sales worried about how he was doing and when she would see him again.

On July 25, they were finally brought back together at a facility near El Paso, Texas. The reunion was happy but brief.

Sales, who entered the United States illegally on May 30, made a difficult choice: She refused to sign a paper agreeing that if she were deported, her son Yaiser would accompany her back to Guatemala. She wanted to give him the chance, she said, to pursue asylum in the United States even if she is sent back.

Because of that, she and her son were separated again after just two hours together, and he was sent back to the Florida children’s facility where he had previously been held.

The decision that kept them separated also gave her son a better chance of being allowed to stay in the U.S. legally, a Reuters analysis of data from the courts’ Executive Office for Immigration Review suggests. 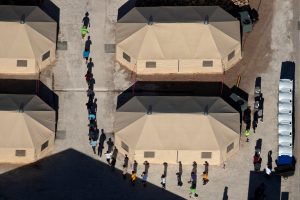 FILE PHOTO: Immigrant children are led by staff in single file between tents at a detention facility next to the Mexican border in Tornillo, Texas, U.S., June 18, 2018. Picture taken June 18, 2018. REUTERS/Mike Blake/File Photo

More than 2,500 families were separated at the U.S.-Mexico border in the spring as part of a zero-tolerance policy toward illegal immigration that ended in June. By separating them from their parents, the government rendered the children “unaccompanied minors,” which conferred certain advantages on them under U.S. immigration law, including a different, more child-friendly asylum process not available to children never separated from their families.

Additionally, a network of immigration lawyers specializing in children often agree to represent unaccompanied minors for free. And should they fail at an initial hearing with an asylum officer, the children have the opportunity to present their claims anew before an immigration judge.

Overall, although this was not something Sales could have known when she made her decision, unaccompanied children from the so-called Northern Triangle of El Salvador, Guatemala and Honduras win their immigration cases more than twice as often as others from those countries, Reuters’ analysis found. In the last three years, 40 percent of unaccompanied children from the countries were allowed to remain in the United States compared to 19 percent for others from the countries.

There is no record of how many separated parents have opted for their children to pursue separate asylum proceedings even if it meant leaving them behind. But at least six other reunited families with Sales in El Paso on July 25 made the same decision she did, according to Taylor Levy, legal coordinator at the Annunciation House in El Paso, which is working with the parents.

Both Immigration and Customs Enforcement (ICE) and the Department of Health and Human Services, which arranges care for children in immigration custody, declined to comment on the Sales’ case.

On Thursday, a San Diego federal judge said the form given to separated parents to sign did not constitute a legally valid waiver of their children’s asylum claims and ordered their deportations temporarily halted until the issue was resolved. The form “was not designed to advise parents of their childrens’ asylum rights, let alone to waive those rights,” wrote Judge Dana Sabraw in his order.

‘HE WANTS A BETTER LIFE’

After being reunified that day in El Paso, parents and children were loaded on a bus and asked to sign papers agreeing to be deported with their children. Those who refused to sign, including Sales, were led off the bus, according to interviews with four detainees and a court filing, leaving their children behind.

Sales said that after speaking to Yaiser for two hours on the bus, she realized she could not sign papers that might forfeit her son’s chance to remain in the United States and study instead of returning to Guatemala, where they were unsafe and Yaiser had fewer educational opportunities.

“He told me that he wanted to stay, that he didn’t want to go back, but that he wanted me to stay with him…. I felt sad,” Sales told Reuters by phone from the immigration detention facility where she is being held. “The simple truth is he wants a better life.”

Sales remains hopeful that both of them will eventually be granted asylum and allowed to stay in the United States. If her asylum claim is unsuccessful, she hopes her son’s will succeed, and that he can live with his aunt and uncle, who have applied to sponsor him.

In an interview with Reuters from the Florida facility where he is being housed, Yaiser said that he and the other re-separated children on the bus that day were sad when their parents were taken away again.

“We started crying because we couldn’t say goodbye after we’d only seen them for a short time.”

Two other fathers on the bus with Sales told Reuters they felt pressured by immigration officials to choose the option of being deported with their child.

“They told us … this was the only option,” said one of the fathers, who spoke on condition that he be identified only by his initials, S.T.

At a July 31 congressional hearing, ICE official Matthew Albence denied that officials were coercing people into agreeing to deportation.

The government said 154 parents had decided against reunification as of August 16, according to a court filing. The filing doesn’t include the parents’ reasons.

‘IT WOULD BE SAFER’

Another father on the bus, identified in court documents only by his initials J.M., spoke to Reuters about his reason for not agreeing to be deported with his 16-year-old son.

“The problem with Honduras is that they recruit them for gangs, and I didn’t want that for him,” he told Reuters from detention. “Of course, I would have preferred to be with my son, but I made that choice for his well-being. I have to accept that.” His son was returned to the Casa Padre youth shelter in Brownsville, he said.

During their reunion on the bus, Yaiser told his mother he wanted to stay in the U.S. to study and make her proud, Sales said. But he also told her he hoped she could stay with him because “it would be safer.”

Yaiser’s attorney, Jan Peter Weiss, visited him at the Florida facility on Saturday. “He is very sad,” said Weiss. “He asked about his mother every other sentence. ‘Is my mother alright? What do you think is going to happen to her?’”